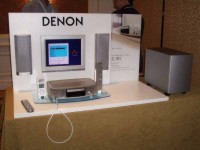 As the home theater-in-a-box market continues to grow (for example, it showed $800 million in sales this year as opposed to $450 million in sales for A/V receivers) it is apparently clear that consumers are  very interested in small form factor 2-channel and home theater systems. Denon is addressing this market in full force with its new S-Series home theater pre-packaged systems.

The design targets are simple:

The first two systems developed by Denon in the S-Series are the S-101 and the S-301. The S-301 features an acrylic and aluminum front face, round form factor on all sides, "sexy" blue lighting accents, and an arched appearance for style and compactness.

In appearance, the S-101 differs only in color, lack of acrylic facia materials and orange illumination in lieu of blue.

The speakers are slim and designed to produce excellent sound for both movies and music. The goal was to make this a well-rounded system that outperforms, as well as out-functions the competition.

Some very notable features (a complete list and comparison chart is below):

iPod Connectivity
The S-101 and S-301 also add some incredible iPod functionality. It includes control and command of iPods through the use of a proprietary cable (included) and will put the iPod data on the screen (looks just like a full-color representation of what you would see on the iPod). The iPod will even charge while plugged into the systems. The cable does perform digital to analogue conversion - this was necessary in order to comply with Apple's DRM needs. If you use an iPod Photo you will get pictures along with any soundtrack you wish to play along with it - all through the cable. Remember, the remote control is able to control the iPod at this point - this is VERY cool. The system works with 3rd or 4th generation iPods or iPod Minis. You can simply use the mini stereo plug (included, no remote control or charging obviously) for older units.

Without any further ado... here is the full feature chart for the two units.

There is so much to say about this units. Take special note (above) of RS-232C support as well as 12V trigger output for the S-301. The S-301, in addition to iPod functionality can control a Rio or other portable USB-based players or flash devices through the inclusion of a USB port that will also charge the unit while connected. SImply connect the device and the S-301 can navigate the content with its on-screen display. The remote functions automatically control the playback of the device contents. These pictures show you some of the compatibility and flexibility of these new systems. This home theater product is designed to go head to head with a certain name brand product that you would probably recognize. Just in terms of appearance, features, flexibility, and ease of use I believe it could stand to alter the marketshare numbers significantly.