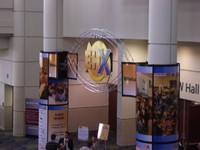 Before I talk about the demo rooms let me mention a few interesting things that I saw on the floor.  First of all I never know who I’m going to run into at one of these shows and I ran into Clint (he arrived earlier than I expected) at a very interesting product.  It was a speaker/planter system by Madison Fielding, Inc. There were several configurations, but basically it was a planter where the lower half is a speaker cabinet.  All sides could have drivers mounted in them and played in all 1, 2 or all directions at once. They are made from outdoor grade plywood and seemed to be sealed very well. The coolest part, I thought, was the presence of a drain for excess water from the plant which passes (safely) through the speaker enclosure section to the bottom.

Last year I mentioned Quest Acoustical Interiors' cool track system for hiding absorption or diffusers panels.  They were at EHX again and I stopped by to see them because I purchased the track and diffusers for my reference room. I built dipoles that fire directly forward as well as back into the diffusers.  The system and diffusers work very well.

I then made a stop at Logitech's booth to see their new Harmony 1000 RF remote control. I played around with it a little and really liked the simplicity and the feel od the device. The touch screen seemed to be fairly responsive. Keep an eye out for a review of it in the near future.

Now on to the demo rooms. I know you see a lot of RBH  Sound speaker reviews on this site, but the fact of the matter is they really know their stuff.  Their sound system, along with Auralex acoustic treatments, really shined through. They won first place for best demo room, so it’s not just a few Audioholics guys who think so. They displayed the T30s with much needed absorption on the sides to cover up the hard concrete block walls (Convention Center rooms are hard to deal with acoustically speaking). They had no separate box subwoofers so the dual subs integrated into the biamped T30’s did all the work. It was a very impressive demo.

I saw a cool product in one of the other demo rooms that I thought was worth mentioning. It was custom printed artwork acoustic panels (I’m all about acoustic treatment this year) from Acoustic Innovations.  Basically you can give them a jpeg image and they will print it on acoustically transparent material (and with acoustic treatment behind the material) all put together within an artistic frame.  I had to laugh a little bit at the sales pitch they gave me. They said we can either make the art absorptive or reflective.  I asked why I would want to pay you to make it reflective I could just have the art work framed with glass in front of it. It doesn’t get much more reflective than glass. There was a nice moment of silence after that comment (in all honestly, I think he meant to say diffusive). The absorptive idea is great; custom art work that absorbs sound that can be made to fit any space and go along with any theme in the room.

I was very enthusiastic when I found out that Sim2 had their 1080p 3 chip DLP projector set up in a demo room.  The Sim2 HT5000 is a state of the art projector priced at $50,000. Knowing that Sim2 has a special patent on their light engine for the C3X 3 chip 720p projector which keeps the projector small in comparison to other similar projectors, I was very surprised at the large size of the HT5000. I asked the Sim2 representative why it was so large and she explained that it was because of the size of the DLP chip itself which causes the light path to be much larger. She assured me that Sim2 was working on reducing the size of this projector to be more like the C3X. As I waited for the demo I took a look at the DaLite screen and its masking system. It was a 1.78 (16:9) ratio screen with horizontal masking which is what I think is the ideal set up (I’ll comment on that shortly).  I liked the masking system, it was very unobtrusive and quiet in operation.

While I was waiting they had a game playing from the Sony PS3 which turned out to be their only source. The demo was “House of Flying Daggers” on Blu-ray.  I was very disappointed in this presentation. I doubt the problem was the projector; it had to have been the PS3 Blu-ray player.  I was sitting in a special high back theater seat and because the back was so high I could not hear any surround content, otherwise the sound was okay.  After later seeing some other demos on HD-DVD I became more unimpressed with the Blu-ray. Let's just say the Blu-ray demos at this year's EHX made me lean even further towards preferring HD-DVD. This Blu-ray demo looked no better than my 720p single chip projector sourced with a standard DVD.  The funny thing is that the Sim2 representative seemed more disturbed that they received the wrong screen set up than the fact that the Sony PS3 player made their projector look terrible at a $50,000 price tag.

The recent trend that stood out was the new screen ratio of 2.35 with vertical (sidebar) masking which really doesn’t make a lot of sense to me although it sounds cool when they’re pitching it. I saw a little of this format last year but many demos had it this year.  I had a discussion about this ratio with the Sim2 rep and after she heard what I had to say she was in agreement. If you follow the trend and get a 2.35 ratio screen instead of a 1.78 ratio (16:9) you will end up with vertical bars on the sides of the screen if you are going to watch HD TV content on it.  Furthermore, I read once that there are about 80 different ratio formats for movies. Yes most movies today are 2.35 but some are wider so now you have a screen that has bars on the sides for TV and bars on the top and bottom for movies wider than 2.35. Now any kind of masking system that hides the bars either way definitely makes the screen look a lot better.  I think that people should get the widest possible screen in a 1.78 ratio which will take full advantage of HDTV.  Then add horizontal (top and bottom bar) masking.  If the movie is a wider format you can just increase the mask size. Because the screen is as wide as it can be you don’t lose anything.  This method works with anamorphic lens projectors as well.

It was good to see that there were more demo rooms this year at EHX which makes thing more interesting for us.  I hope next year Sim2 considers who they will team up with and that RBH Sound keeps doing what they’re doing.