Billed as "The New Force in Projectors" this new product from Nikko is not nearly as cheesy as it's slogan. In fact, it's freakin' cool. We got wind of this booth walking through the South Hall when we spotted a fully outfitted Darth Vader and Stormtrooper. I don't care who you are, when a 6-foot-four Sith Lord stands in your path you stop. And Listen. Of course he didn't need to say anything because we saw IT. A 1/2 scale, fully-functional R2-D2. This wasn't just a model, however. It moved. You controlled it via wireless remote - shaped like a Millenium Falcon. It goes forward and backwards, can turn 360 degrees and can even tilt all the way back. It's head even swivels realistically independent of the body.

Here's what else it has on-board: 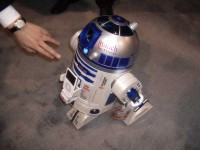 And some key specs not covered above: 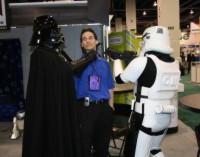 MSRP is just $2499 for the M10 projector and while this isn't the most advanced projector on the market by a long shot, it is quite possibly the most innovative and enticing centerpiece I've seen in a long time.

What's the motto here? Simple, if you're walking a convention and see some threatening members of the Imperial Empire - it might be a good idea to stop and have a look, you just might see something interesting.