How to Be a Crack[ed] CES Reporter for Audioholics 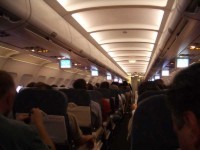 There's not much to do on a 4 hour flight from Tampa to Las Vegas. You either read, use your laptop, or engage in exhilarating conversation with the lecherous neighbor to your right who is flying out for the porn show being held concurrently at the Sands Expo Center. I broke out the laptop… my 15.4-inch, 8-pound gorilla laptop… Why do I carry such a monstrous machine with me to a trade show? Well, my normal 12-inch, 5 lb model decided to become intimate with a can of Pepsi a couple of weeks before I left. Repairing a laptop is somewhat challenging. You don't so much repair a laptop as you send it to the manufacturer in a futile, masochistic, and hopeless grab at a second chance, only to have them tell you that the repairs will cost about the same as a new unit. The laptop repair department has exactly two employees. The first one's job is to fix things like replacement screens and damaged keyboards, which take approximately 5 minutes to replace. The second one simply tells you that the repair will cost exactly $20 less than a new model. This is an extremely efficient business model and saves a ton in payroll. OK, back to the flight.

It's January, 2007 and the airline is running its in-flight entertainment using an analogue Hi-8 system - complete with wow and flutter that would make a 70's disco music recording engineer shudder with loathing. I can't remember the last time I saw video actually rewind, complete with sync errors and that rolling effect you get when the source component has no time base correction (TBC) circuitry. I love it when my friends tell me about their international flights with Swiss Airlines and other similar companies. Their stories are all the same. Onboard free Internet access. Hundreds of television channels. Free music and premium movies on demand. Plush seats with decent legroom. Polite flight attendants and relaxed security screening stations that make sense. What do we get here in America? Rosie O'Donnell handing out soy peanuts and rationing half a can of Coke while you're strapped into a seat my newborn would barely find roomy. After four hours I can use my buttocks as formers for concrete steps. Of course, they do offer you a $0.25 Chinese-made pair of "you buy-em you keep-em" headphones for only $5. Walk into any corner drug store and you can likely get them plus a "free" portable radio for the same price. For all our wealth, as Americans we apparently have an incredible ability to settle for tremendous amounts of mediocrity. 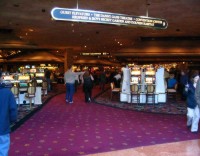 But I'm not bitter - and this is supposed to be about our experiences at CES, so I'll end my digression here and move on to another one: Hotels, or better - hotels with casinos (of course in Vegas this is like saying "cars with wheels"). This year we stayed at the Flamingo - which by all accounts is a fine hotel (at least it doesn't rent by the hour). Hotels in Vegas are set up in a very unusual way. There are basically three sections: the rooms, the casino, and "everything else". How it works is this: Need the monorail? Walk through the casino. Want to go to a restaurant? Walk through the casino. Need something from the gift shop? Walk through the casino. All roads lead through the casino, so if you need to go anywhere, just start walking through the casino - there's no away around it. Trying to avoid a casino in Vegas is like trying to avoid second hand smoke in the hotels. It's impossible, so just accept it and move on. Also, we realized another quirky thing in the hospitality business. There are some translations you'll need to be familiar with if you plan on asking for directions to anywhere on the strip. We've provided the translated definitions below to help you if you're ever in Sin City:

OK, now you are ready for Vegas, but are you ready to become part of a crack[ed] team of reporters bent on covering more of the CES show than any other news outlet? This isn't for the light of heart. To play on our team (and some people have been "booted" from the team in the past) you need to be able to survive on 3 hours of sleep a night, refrain from doing any gambling, skip the usual shows and entertainment Vegas is known for and generally being prepared to put in 20-hour days. Of course we do have a little fun. This year we took everyone to see Love , the Circque de Soleil show which opened just last year. It was a blast and we were amazed at the production value that went into making that show possible (see our editorial on the show). We also make a point to eat well every night. You can't stay up until all hours of the night and not have a good meal in your stomach - this is mandatory.

This year we also introduced a new member of the dream team: Eric Shelton, who headed up shooting and editing a bunch of video coverage of the show. We normally have a tough time providing crazy amounts of CES coverage in just three days, but this time we added a new component. Well, somehow, we managed to get over 80 pages online in just two days. The final day we spent together shooting videos within the South and Central Halls and having some real fun covering products on camera. All told this added quite a bit of work which the Dream Team almost took in stride - I was amazed and impressed. This was tough and they pulled it off. We found out a few things about ourselves along the way as well - there are very distinct characteristics that make one ready to be on the Audioholics team…

In fact, you know you're probably on the Audioholics CES show reporting crew if:

So that's what it takes to be a crack[ed] reporter for Audioholics during the CES show in Vegas. Of course, the most important trait would have to be the ability to view all of this hard work as fun and not the most grueling 72 hours of the year, which is pretty much what it is - but don't tell anyone!