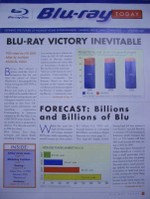 Capturing an act of almost shameless promotion and exaggeration to a level we've almost never before seen, we witnessed this beauty of an announcement on the show floor (no, really, I stepped on it as it was lying on the show floor):

Let's evaluate just a few of the articles and headlines located in this publication:

Hey, we're excited about these new HD-DVD formats as much as anyone, however we feel it's important that consumer opinion be swayed by the facts, and not just one side's (or the other's) attempt at manipulating the data and incorrectly presenting the statistics (present and future) of a format. This "magazine" was nothing short of a Blu-ray hype-machine that distorted the truth and ignored what's really going on in the industry.