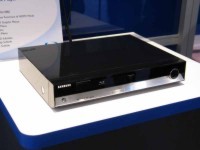 Samsung Electronics formally kicked off thetheir entry into Blu-ray, as they demonstrated their BD-P1000 Blu-ray disc (BD) player at CES. Their particular player will play back content at native 720p or 1080i video resolutions (we could not find anyone to discuss 1080p as mentioned by other manufacturers such as Sony). The player will ship in early Spring and shortly thereafter will become the first BD player from any manufacturer to be sold in the U.S. It is expected to retail for approximately $1,000.

The increased storage capacity of Blu-ray discs allows the Samsung BD player to offer an astounding 25 GB of content on a single-sided disc (50 GB per dual layer) - nearly six times the capacity of traditional DVDs and enough space for two hours of high-definition movies or recorded content (see chart below). The BD-P1000 is scheduled to ship to the U.S. in early Spring 2006, in tandem with the availability of the first pre-recorded Blu-ray titles. It is expected to retail for approximately $1,000.