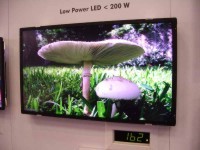 We were lucky enough to get a chance to preview LGs prototype backlight and LCD display technologies. These were not available on the show floor but were located in the top level of the North Hall. Some of these units were absolutely stunning while others demoed next-generation technologies or backlight systems that will help to drive displays with lower power requirements or higher color reproduction. Here are the technologies which really impressed us:

Example 1: 47-inch Full HD LED Backlight System
This display looked absolutely stunning. It had superb color range, a nice bright image and significantly wide contrast. Since the display was not showing much motion we can only comment on the color, resolution and contrast aspects of this unit - progressive scan performance and its ability to scale coudl not be ascertained in the demo. Some of the specs of this model included: Example 2: 42-inch EEFL (External Electrode Fluorescent Lamp) Backlight System
This display had decent color and exceptional detail. The advantage here was very low power consumption not advanced contrast or color so we'd rate this high for commercial use. Some of the specs of this model included: Example 3: 42-inch 2D/3D Switchable Display
OK, now 3D displays are generally impressive - but one that doesn't require the use of special 3D glasses? Now that's hot! LG's prototype 42-inch switchable 2D/3D 1080p LCD display nailed this technology - at least for a successful demo (this one was on the show floor as well, in fact.) It employs a 3D technology known as parallax barrier type whereby one or more vertical slits are rapidly scanned in the horizontal direction and the appearance of the image points on the screen behind are timed precisely so that a viewer at nearly any position will see a stereo image. Let me just say that it works and allows for multiple viewing positions within the room. I could really see this taking off in several years - especially with respect to animated films which can be easily converted to 3D content through a programmed re-rendering process (similar to what Pixar already uses to create its custom 4:3 aspect ratio DVD versions).