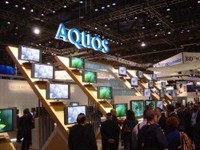 As predicted, Saturday morning greeted me with a raw and sore throat as well as a pounding headache. The artificial environs and germ warfare of the Convention Hall had finally gotten to me. Either that, or it was my strict diet of Miller High Life and cheeseburgers the week leading up to CES. One way or another, my immune system was in shambles and CES exposed it for the flimsy veneer of health that it was.

Today would be, in effect, the final real day of activity on the show floor. No doubt the exhibitors were just as beat as the attendees and would likely be looking to start wrapping things up as soon as possible. I told Clint that it would be a sure thing that CES wouldn't even resemble the madhouse it did yesterday until at least lunchtime. With the 150K plus attendees waking up after their first weekend night in Vegas, the 'hangover factor' today would be big.

I took a welcome hot shower at 7:00 am and tried to get into the best mood I could for what was going to be a horrible day. I pondered asking the crew if they minded me staying at the hotel and ordering room service all day. Needless to say, that idea probably wouldn't have gone over too well. I did tell Clint before heading downstairs that today would be short and sweet. I was going to take a few more snapshots, collect some additional info, and then get out of there ASAP and commence writing back in the more comfortable confines of the hotel room.

I went downstairs and waited for Clint's arrival so we could get some grub at the Frontier's buffet where we were quickly becoming regulars. I waited in the casino and I must say, as a self admitted gamble-hound, I found the spinning roulette wheel a little too much to resist. How could I leave that silk shirted dealer with nothing to do? Not wanting to trade cash for chips, I just asked the dealer if I could throw down a twenty on red. He nodded and spun the wheel. I watched the ball whirl as my heart raced, finally tumbling into a slot. Black. Ouch. That stung, but no problem. I'll put $40 down, win back my original $20 and be $20 ahead. I put $40 down on Red again. Same spin, same whirl, same tumble... I tried not to look this time around to see it when it fell into its colored slot. Maybe that would help. Plus, the appearance of not looking concerned when losing is crucial to winning. I heard the plastic ball land. Black again. Crap. Alright Toby, no big deal here, just drop down $80 on Red, recoup the losses and come out $20 ahead. Same superstitious ritual of feigned apathy and looking elsewhere, same results... Black again. Now, $140 in the hole, a bet of $160 would be needed to recoup everything and come out $20 ahead. I need to get my money back. $160 on Red. The wheel spins. Green zero. Money gone. I think I'm going to puke.

Wow, that wasn't the brightest thing I've ever done. My wallet considerably lighter, I waited in line for Clint at the buffet. Once he arrived, we took our seats and then made our ritual return to the buffet line, where today Clint was scolded by the Mexican buffet chef for apparently trying to request too many ingredients for a single egg omelet. Clint learned a hard lesson that morning: If he wanted to go big league in the omelet department, he needed to step up the egg count, or risk incurring the wrath of Mexican Omelet Man. Breakfast again was my savior, and I made sure I got plenty of it, not knowing how low on energy I'd be later on.

When Clint and I arrived at the South Hall, the crowd was light as we had expected. Light, meaning only tens of thousands of people at this point. I told Clint that I had a short laundry list of things to take care of and exhibitors to see before I went back to the hotel and started typing up all my collected data. Clint had a few final day meetings to attend, so we figured we'd see each other back at the hotel that night. I wanted to get this done and get out of there.

While Day 3 on the floor did not bring any special CES characters like the past few days, it did bring a unique meeting. I stopped by yet another "shall-remain-nameless" booth (aren't you getting sick of these?) to check out a few things and take the obligatory gear snapshots. The booth of this well-know component and subwoofer manufacturer was in the center of the Hall. The booth was modest in size, but with a full staff of folded-armed sales goons ready to ambiguously answer any question you may have with a series of "ummmmms" and "hmmmms" before passing you off to the next guy. I did my usual interrogation, asking for new gear and its associated literature. They showed me one piece that looked promising, but I was told that in fact it had been out for a while. After a few more questions, I sensed the rep was clearly uncomfortable discussing his company's product, so he called over someone else. One common theme I noticed among many of the exhibitors was an aura of combativeness and apprehension whenever it came to members of the press. This was not unlike when you give a customer service rep a piece of your mind at your local mall... they'll call over a manager whom they whisper a quick briefing to, only to be followed by an impatient if not angry manager coming up to you and going "CAN I HELP YOU??!!" ...as if his mind is not made up already. It's the same vibe at the booths. Distrust and skepticism of your intentions. Free Internet advertising to hundreds of thousands of people inspires distrust though, I understand.

The next rep came around the corner sized me up with the face of incredulity. I introduced myself and he had a laugh when he looked at my press badge. I laughed nervously with him and asked if he had heard of us or checked out our website. He looked at me menacingly and ignored the question. I kind of waited a few awkward seconds before asking him again. This time he did respond. "Yeah, I've seen your website. Let me tell you a few things about your site. You guys reviewed this piece of gear a few months back - who was it, Gene? Steve? I don't know. Anyway, we had one hundred and sixty positive reviews on this deck, and one negative one (pauses)... ONE negative one. Do you know where that came from??"

"Umm, Let me guess... us??" I awkwardly remarked. "Yeah," he said, "You guys". I of course had no clue what he was talking about, but I did know to trust the judgment of whatever the crew posts on Audioholics. So, while I couldn't intelligently defend it, I did have to represent the site with a certain amount of confidence. I asked him if he saw any truth in the review. (How was that for a PC deflection?) He responded by saying "Yeah, I did. In fact it was very accurate, but it just went to unnecessary lengths to prove something was wrong with it. I mean, in one of the tests, they selected a channel with no input source and cranked the volume to 10 and complained that it was too noisy. Who the @* & %# does that?? I mean seriously, our equipment gets a bad review because the gain is noisy when you have it cranked to 10 with nothing plugged into it??"

I told him that I didn't see the review, but I did inform him that our site caters to many enthusiasts of different levels of appreciation, and we need to tailor our reviews to try to speak to as many as possible. A casual listener would not care about such research anyway. "Yeah, but who listens like that or cares about stuff like that...? I just like my stuff to sound good, that's all." I assured him that I liked my stuff to "sound good" too, but also reminded him that the test was probably an indicator of other things or done just to make a complete analysis, not to serve that sector of audiophiles who like to listen to the sound of fully cranked receivers with no inputs. I don't think my explanation ultimately did anything in regards to changing his opinion, but he did at least confirm for me that we had in fact covered the "new" item at his booth. My work here was done I guess.

It wasn't too long after this that I said farewell to CES' last real day of action and got aboard my shuttle bus. Late as usual, I was forced to take a shuttle bus that dropped me off nowhere near my hotel. The subsequent walk, which couldn't have been good for my cold, was a long one. Upon arriving at my room, I crashed and crashed hard. I woke up 2 hours later groggy, but happy to be "home", or as close to that sensation as I could get at the Frontier. The next eight hours were spent in the artificial warmth of my hotel room, typing and transcribing till my fingers were numb. Tomorrow would be the last day at CES and I was about ready to wrap this thing up.