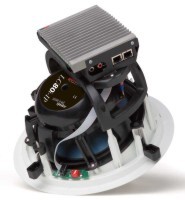 The line will initially consist of two models, the rectangular LC265i-IP and the round LC80i-IP. The products are flush-mount speakers based on Polk's existing LCi Series in-wall/ceiling models. Digital amplifiers, electronic crossovers, DSP circuitry and provision for TCP/IP control circuit boards are built into the speakers to deliver a wealth of demonstrable convenience and performance benefits.

The speakers have integrated digital amplifiers, crossovers and a built-in Room/Performance optimization DSP so they are ready to be used with legacy analog inputs or as part of a cutting edge IP media distribution system.

The built-in digital amplifiers and crossovers bi-amplify (or tri-amplify in the case of the three-way LC265i-IP) the loudspeakers for more accurate, lower distortion audio performance while integrated Digital Signal Processing (DSP) electronics provide sophisticated sound tailoring to optimize the performance of the speaker for the room and speaker locations.

Integrators will be able to gain access to the DSP using a laptop PC connected via a mini USB port on the front baffle of the speaker or through the network when used in an IP network. Polk will supply Integrators with a PC-based software interface that makes the speaker position and room acoustics optimization virtually foolproof.

While the Polk LCi-IP Series speakers provide the greatest functionality when used within a NetStreams DigiLinX system, they can also accept inputs from any analog distributed audio system and still deliver significant performance benefits.