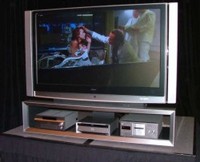 The new Sony 70-inch Grand WEGA micro-display rear projection television was absolutely a show-stopper with its full 1920x1080 HD resolution. On some content this thing looked almost like a sheet of glass over a window until you got within a couple feet of it.