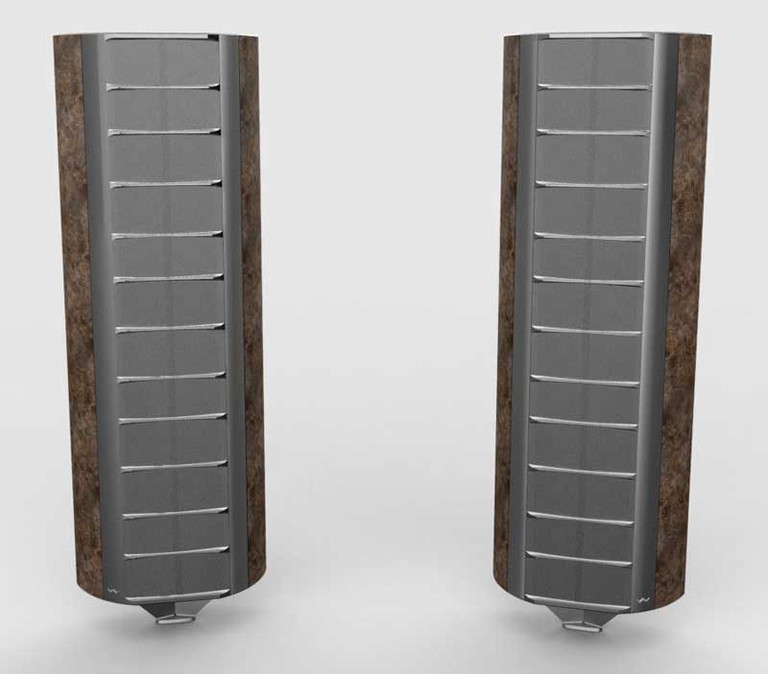 "Through customer feedback, we identified an opportunity to address both the ultra high-end audio market and installations for large theaters where high sensitivity and maximum SPL are critical. We applied the cumulative planar magnetic transducer design experience of our team to create the Wisdom Series LS4 and LS3, resulting in a totally fresh concept, the most advanced speaker we ever made and, we believe, the best performing domestic speaker system available. They completely shatter all preconceptions about speaker performance and placement, while offering the uncompromising customer that prefers to see the speaker in the room a truly unique solution. These products truly amaze."

The LS3 includes three modules with a combined vertical line source height of 60", making it an ideal center channel speaker. For a full behind-the-screen configuration, where the theater is to include a perforated, acoustically transparent front projection screen, designers and installers might opt for three LS3 configurations. As the LS4 and LS3 feature identical acoustical characteristics, in whatever configuration that might be employed listeners will enjoy perfectly matched sound across the entire soundstage.

Compared to conventional loudspeakers, which often cross over from the midrange driver to the treble driver in the 3 kHz range (where the human ear has the widest dynamic range and therefore the greatest sensitivity to acoustical aberrations), Wisdom Audio's wideband planar magnetic technologies provide the ability for the treble driver to cover a much wider range than is possible with a conventional tweeter, eliminating the audible degradation associated with conventional loudspeaker crossover configurations. As the systems are bi-amplified, there are no conventional passive crossovers employed, and the systems present a purely resistive load to the amplifiers, assuring power amplifier stability even at exceptionally elevated output levels. Internal wiring features cabling sourced from Transparent Audio, the industry's most respected audiophile cable manufacturer.

The technical specifications are indeed beyond impressive. For example, the LS4 features ultra-high efficiency (100 dB at 1 watt/2.83V), along with ultra-high power handling, allowing the system to generate clean, undistorted sound levels to beyond 130dB, completely avoiding the dynamic compression at elevated listening levels that plagues conventional cone and dome loudspeakers. The LS3 features similarly high efficiency and dynamic range capability, to ensure flawless reproduction regardless of the size of the music room, home theater or screening room.

Housed in an elegant, curved arc enclosure, the systems feature a unique aesthetic profile, from award-winning industrial designer Dan Ashcraft who notes, "The objective was to create a design that expresses the power, musical clarity and detail of the Wisdom Series LS4's amazing speaker technology and visually informs the listener that they are about to experience something completely new. The inspiration was to expose the structure of the 12 beautifully CNC machined aluminum driver frames with stainless steel micro perforated covers to create a spine, flanked by two burled walnut panels that all converge at one finite point - technology perfectly balanced." Additional finishes will be available, including matte black for behind-the-screen installations. As the depth of each on-wall enclosure is only 12 inches, customers also have the option of working with their interior designers to conceal otherwise visible LS4s and LS3s behind decorative, acoustically transparent cloth for a completely hidden and integrated installation.

At the heart of the new Wisdom Series models are the company's proprietary drivers, which are entirely different in form compared to conventional cones and domes, and require a completely different manufacturing process. For example, unlike conventional speaker drivers which are magnetized (energized) after assembly, the planar magnetic drivers used in the new Wisdom Series LS4 and LS3 models incorporate magnet assemblies that are pre-energized prior the driver's final assembly. As both Wisdom Series driver types incorporate a push-pull magnetic motor system, the brute force necessary to assemble a driver with opposing magnetic motors and pre-energized multiple magnets is indeed substantial - a twelve ton press is required.

As well, the amount of magnetic energy to achieve such high efficiency and wide dynamic range is similarly impressive. For example, the LS4 incorporates no fewer than 1,656 magnets, equal to 392 linear feet (120 meters). The lower range driver uses ceramic magnets, whilst the upper range driver incorporates neodymium magnets. The combined radiating area of the LS4's low range drivers is equivalent to 43 six-inch conventional drivers, while the combined radiating area of the LS4's high range drivers is equivalent to 96 one-inch dome tweeters. The LS3 is similarly endowed, using a total of 1,242 magnets, equal to 294 linear feet (90 meters), with a lower range radiating surface area equivalent to 32 six-inch drivers, and the high range surface radiating area is equivalent to 69 one-inch domes. Of course, due to the coherent wavefront planar magnetic line source design, the Wisdom Series LS4 and LS3 have none of the sonic aberrations caused by combing effects when multiple conventional drivers are combined in a system.

The Wisdom Series LS4 and LS3 are designed to optimally mate with Wisdom Audio's STS Regenerative Transmission Line® subwoofer, which features the same combination of ultra-high efficiency and dynamic range. With an in-system (externally crossed over) frequency response from 15 Hz to 80 Hz and an efficiency of 101 dB at 1 watt/2.83V, the STS has the dynamic range to handle the deepest bass notes even at extreme output levels as high as 130 dB without distortion or strain. A reference level music system, home theater or screening room/post-production configuration will feature dual STS subwoofers mated to LS4s, LS3s or a combination of the two.

"The Wisdom Series LS4 and LS3 represent the pinnacle of my team's design capabilities in planar magnetic driver design, and showcase the benefits of our planar magnetic transducers and Regenerative Transmission Line® woofer alignments like none other. They surpass anything I have been involved in designing either for consumer or professional applications and establish a new benchmark for our transducer technology."

About Wisdom Audio
Wisdom Audio is the leader in designing and manufacturing high-performance planar-magnetic transducers for architectural speaker applications with more than 100 man-years experience. Wisdom Audio was founded in 1996 to create no-compromise planar loudspeaker systems for the most demanding and critical audiophiles. Wisdom Audio systems employ proprietary, custom-made planar magnetic and dynamic transducers optimized for high performance, high-end architectural audio reproduction applications. Its hybrid-technology systems have earned praise and awards from the specialized media, while satisfying a growing base of customers and dealers worldwide. Wisdom Audio’s multi-award winning Sage Series architectural products are handcrafted in limited quantities by specialized craftsmen at its headquarters in Carson City, Nevada.

Read the Complete Thread
haraldo posts on November 30, 2010 04:14
Actually these Transmission line subwoofers are perhaps according to how TLS Guy likes to make them, perhaps members may get design sketches from him and save some dollars to get the subs and a Corvette ZR-1…. we call it a win-win
GranteedEV posts on November 29, 2010 23:00
dude, it`s just a preview, not even a review. `pretty cool`has nothing to do with its value or measured performance. it`s not like they used the `gotta have it`
Boerd posts on November 29, 2010 22:24

The Corvette ZR1, Viper ACR 10, a few Porsches, etc beat the CCX on Nurburgring for a FRACTION of its price:

Now I don't want to start talking about cars but the question really was - does the rating “Pretty cool” take any performance measurements into consideration? At this price I expect something like 20Hz-20Khz +/- 0.01db (+/- 30 degrees off axis) and 0.01% THD for speakers at 130db, etc.
And in the end it still begs the question - is there an audible difference vs a very good 5-10k$ speaker?
haraldo posts on November 29, 2010 18:15

Boerd, post: 769044
Do you have any measurements? It seems to me they were declared “Pretty cool” a bit too easy given the astronomical price…


Well, the Wisdom subs, they can at least play loud… very very very loud, looking at specs for the mentioned STS subs:

And they don't seem to be able to make up their mind…. they speak higly about benefits of line source speakers but still offer point source speakers too, so they seem to play all sides… just to be safe
Boerd posts on November 26, 2010 18:56
Do you have any measurements? It seems to me they were declared “Pretty cool” a bit too easy given the astronomical price…
Post Reply