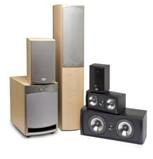 With such a vast number of speaker manufacturers it is easy to overlook any one of them. I have heard of PSB speakers but never had the opportunity to listen to them nor did I ever pay much attention to their reviews. PSB, which stands for “Paul & Sue Barton”, is a company that has been around since the seventies and according to Paul, before that unofficially. Paul, like me, was a Do-It-Yourselfer when he made his first speakers with his father. He took the next step when he started selling speakers to students at a nearby college. He later officially started PSB and did all the designs himself. Not until recent years did Paul petition the help of David Smith to be the company’s Director of Product Development because of the large growth that PSB has undergone. The driving philosophy behind PSB is clearly Performance and Value. Their main goal is to offer high performance at reasonable costs and the Alpha Series falls into the entry level “In Room” speaker.
Next Page ⇨
Like This? Check out our other Floorstanding Speaker Reviews!