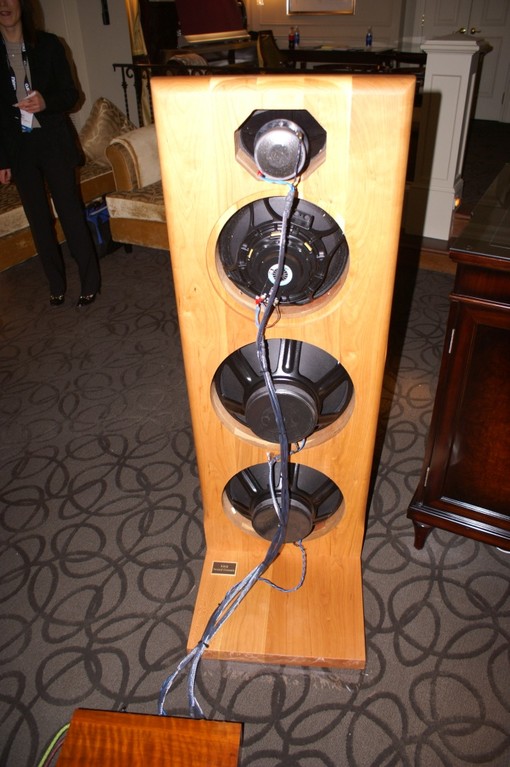 Every year there are many exhibitors who do just plain crazy things. K&Q ranks high on this list for 2009. They were displaying a rather large floor standing loudspeaker which seemed to have no low end at all. When I walked around the back, it was obvious as to why. The speakers are mounted on a long tall narrow baffle, just large enough to mount the drivers. Understand this is a box missing 4 of 6 sides. Works fine for very high frequencies, but allows the rear wave (pull) to cancel the front wave (push) almost 100%. This is the sort of basic physics most speaker designers learn in Acoustics 101.

We should mention this company makes tube amplifiers. We hope next year we could hear them on a well designed speaker, then perhaps we could offer them praise on their efforts.

Read the Complete Thread
R-Carpenter posts on February 07, 2009 00:32
In case like this I would like to see some measurements. For all we know it could be a great speaker and one irritated reviewer or it could be an amateurish design with no concern for the laws of physics.
The fact that this reviewer is dissing the speaker because it's a dipole or I should say, he's showing he absence of knowledge about dipole speakers by saying “it's missing 4 out of 6 sides” tells a lot.
justincz posts on February 06, 2009 11:29

Paul_Apollonio, post: 508857
If you are lucky, a direct radiator loudspeaker may give you 1-2 % efficiency. To say by using an open baffle we merely trade off a 12db (closed box) or 24db (Vented Box) rolloff for a 6 db (Open baffle) rolloff without mentioning the rolloff frequency had increased from 50 hz to 250 is either intellectually dishonest or worse, ignorant. Much of loudspeaker design involves compromise, and often the designer will intelligently choose to add mass or more motor force or use a sealed system versus a vented one for reasons of preference. The preference stated by this manufacturer was “It makes the midbass sound better”. I am sure that this midbass was clearer as it had no low end to speak of it need compete with for the attention of his ears. There are NOT “many” (if any) good open baffle designs that go low enough to be able to claim “Full range” status, and there is far too much going on in the low end that adds to the musical experience to simply throw it away for the sake of being different so as to distinguish oneself in a crowded marketplace. Intelligent people can disagree. That said, to use 3 woofers on an open baffle is like striking three matches in a moving car while refusing to close the open windows, then wondering why you cannot light the flame. In a word, stupid.

you oviously have no clue about OB speakers.

these speakers is a good design with the correct drivers for OB. probably eminence with the right qts and fs spesifications.
claiming that it is dumb to use 3 woofers in OB is the dumbest thing iv ever heared. its a piece of cake to get flat response from this kind of speaker with the right woofers. and multiple drivers = more dynamics.
the manufacturer is correct, bass sounds alot better in open baffle. but you wouldnt know how live music sounds until you tryed them for some time. box speakers sound colored and compressed in comparison.
bumpyride posts on January 14, 2009 12:25

Paul_Apollonio, post: 508857
If you are lucky, a direct radiator loudspeaker may give you 1-2 % efficiency. To say by using an open baffle we merely trade off a 12db (closed box) or 24db (Vented Box) rolloff for a 6 db (Open baffle) rolloff without mentioning the rolloff frequency had increased from 50 hz to 250 is either intellectually dishonest or worse, ignorant. …There are NOT “many” (if any) good open baffle designs that go low enough to be able to claim “Full range” status, and there is far too much going on in the low end that adds to the musical experience to simply throw it away for the sake of being different so as to distinguish oneself in a crowded marketplace. Intelligent people can disagree.

Those are all good points, but, as you mention, engineering is about tradeoffs. The 6 dB/octave roll off starts higher, and the 12 dB/octave first-order roll off of the speaker resonance is still there as well, but most unbaffled subwoofers have a low resonance in the 20's so that's not much of an issue.

At any rate, you're correct in saying that dipoles aren't often full-range. Linkwitz's Orion is down 6 dB at 20 Hz, but because of the dipole equalization it can only provide serious, clean output down to about 50 Hz. That said, though, there are advantages to dipole bass such as reduced coupling to room modes (http://www.aes.org/e-lib/browse.cfm?elib=7579), and, in the midrange, the back and front wave interact in such a way that the speaker doesn't become as directional at high frequencies as it would in a conventional box speaker giving it a more uniform polar response. Additionally, the null in a dipole's figure eight pattern can be pointed at the side wall reflection point to reduce the first reflection.

Anyway, the issues with bass output discussed above are true of all dipole sources whether they're open baffle or not, so if you're going to build a dipole front speaker than an open baffle is as good a way as any to do it. However, these designs should always be active because providing dipole equalization in a passive design would kill the efficiency of the speaker by lowering everything to the efficiency of the bass drivers - possibly the reason for using 3 of them here.
ratso posts on January 13, 2009 19:49
or actually you may be only calling the K&Q speaker stupid. which may be exactly spot on, perhaps that speaker does indeed suck. it just seems kinda silly when the main peice seems to condemn all OB speakers (not to mention it seems tube amps?). i know this is HT and not 2 channel but come on. if a 2 channel site would openly scoff at “those old out of date plasma displays” it would be because they don't know what the hell they're talking about wouldn't it?
ratso posts on January 13, 2009 19:45
emerald physics. even there old cs2's go 3 dB. down from 20 Hz to 20,000 Hz. and that's for their $3500 speaker. there are a ton of dipoles out there, and many of them have gotten great reviews over the years. many are meant to be paired with a subwoofer. the linkwitz site is run by an EE who has designed many groundbreaking products including speakers over the years, not some fly by night ‘audiophile’ guy. he invented the Linkwitz-Riley Crossover - perhaps you've heard of it. would love to hear a discussion between you and him when you call open baffle speaker designs “stupid”. please check out his site.
Post Reply