Physics Tutorial 2: The Physics of Hearing 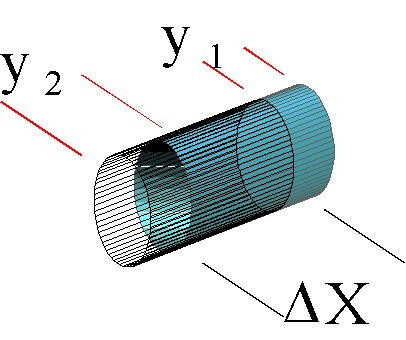 The most important mechanical wave to our everyday lives is sound. So how exactly do we hear? What is the definition of sound?

The Definition of Sound
The first thing we should understand about sound is that it is a mechanical wave. Any mechanical wave is a disturbance that travels through some material or substance, such as air, called a medium for the wave. Sound waves can travel through any kind of gas, liquid or solid medium.

Sound waves usually travel out in all directions from the source of sound, with an amplitude that depends on the direction and distance from the source. As the sound wave travels through the medium, the particles that make up the medium undergo displacements. Longitudinal wave displacements are parallel to the direction the wave travels. That just means the particles will move (be displaced) in the same direction the wave is moving.

Cylindrical Volume of Air being Displaced (see figure above)

Sound waves may also be described in terms of variation of pressure at various points in space (our living room could be considered this space). A sinusoidal sound wave in air (sinusoidal in oscillation but longitudinal in direction), the pressure fluctuates above and below atmospheric pressure in a sinusoidal variation with the same frequency as the motions of the air particles.

When your eardrum is set into motion by this pressure difference, it oscillates which then in turn causes oscillation of three tiny bones (ossicles) in the middle ear. This oscillation is finally transmitted to the fluid-filled inner ear; the motion of the fluid disturbs hair cells within the inner ear, which transmit nerve impulses to the brain with the information that a sound is present.

An important factor that contributes is that the ear is not equally sensitive to all frequencies in the audible range. A sound at one frequency may seem louder than one of equal pressure amplitude at a different frequency.

The curves shown in Figures 2.0 indicate how the perceived loudness is a function of both the frequency and the amplitude of the sound wave. The unit used is the called a "phon". At 1 kHz the phon and the dB Sound Pressure Level (SPL) are identical. As frequency varies, the phon follows the contour curve while the dB remains constant.

These curves tell us in some frequency regions the sound wave amplitudes must be increased to be perceived as equally loud as a sound of 1 kHz, while other wave frequencies must have their amplitude attenuated for the same perception.

The frequency range your hearing accentuates coincides with the frequency range in which important lingual sounds have their major spectral contents. Sounds like "p" and "t" have very important parts of their spectral energy within the "accentuated" range, making them more easy to discriminate between. To hear sounds in the accentuated range is vital for speech communication.

If the curves are turned upside down, as in Figure 2.1, the curves tell give us an idea of how the human hearing attenuates and accentuates parts of the audible frequency range.