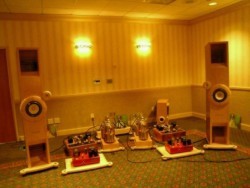 After a summer break, it's back to acoustics. I had intended writing on DIY and some basic room set up tips. However, that's going to wait until next month. I am just returning from the Denver Audio Fest. This was a really great show in my opinion. It was not crowded as it was the first year and you could go into the rooms and listen to your heart's content. Most of the rooms were 2 channel. There were many high efficiency, low power SET rooms (typically horns). But, there was a nice display of solid state and more mainstream loudspeakers as well. In other words, it wasn't a "glass" show, but rather a very nice and refreshing mix.

So why would I write about this recent show for acoustics? We all know hotel room acoustics are terrible, right? Well for the most part they are. The floor to ceiling is typically poured concrete and the walls are relatively flimsy and weak. Placement can be limited and bringing in a truckload of acoustical treatment is less than practical. However, I learned some things at this show and want to report what I found because I think it really bears the fact that different speakers have different interaction in different rooms. And the other aspect is that these people go into a new room with hours to set up-not days, and they have to battle with the acoustics to get the sound at least decent for their potential customers. When I went to these rooms I had no idea I would write this article or I would have photographed all of them and shown exactly what they did. Fortunately, Srajan Ebaen, Editor in Chief for 6 Moons was kind enough to send some of the photographs he took. He also did a full show report with many, many photographs and you should visit it at: http://www.6moons.com/industryfeatures/Denver/denver.html .

Let's start with Cain and Cain and the most incredible looking tube amps by Josh. This room was almost square. Not a good start. But an asymmetrical placement where the distance of EACH speaker to the back wall and sidewall (so all four measurements) were different. This meant the ¼ wavelength cancellation was different and the peak/null normal distribution of a square room was greatly disrupted. The room had no acoustical treatment. The reflections off the back wall were somewhat bothersome, but the high directivity (at least apparently so) and off axis placement made the side wall reflections bearable-they could be heard, but they were not as objectionable as many speakers I've heard. Most listening sessions had the door open to release bass energy. Did they accomplish the goal? Well that depends-they did reduce bass peaks dramatically with placement for a room of those dimensions. They did still have resonance modes that were clearly heard, but not nearly as bothersome as I would have expected for a room of these dimensions. Overall, I would have to say, bravo. Next time just a little bit of acoustical absorption on the rear wall and perhaps some on the sides, and it will be really great sound. Dehavilland used a similar asymmetrical setup, but the room was not as close to square as the Cain and Cain room.

Now there were a few rooms that were set up in the usual conventional fashion. 2 in particular were set up by the same dealer and they were large rooms (practically identical in size and shape). Both used ASC products in a similar fashion. Both had very high end amplification and front ends. However, the speakers were very different. This was a case where the more expensive speaker with full strong bass, was quickly clouding the midrange, and a less expensive speaker delivered clarity, speed and detail, that far surpassed it's more expensive competitor. Was the less expensive speaker better? Perhaps, but I would say that more importantly, the less expensive speaker was suited for it's venue better. This, to me, was a clear demonstration of balancing the room and speaker selection. You don't want to put the mongo behemoths of the universe in a 10 x 12 room. By the same token, don't try to rock on a pair of small 2 way monitors in a 20 x 30 room. Select your speakers and room accordingly. They work in tandem, so you have to select them to work together well.

Another room that was very unusual in terms of acoustics was one by Listen Up located in Denver. This room had the Sonus Faber line. It was a long window wall and on the long wall they had set up 2 separate systems. One was a pair of monitors (to the left), the other was the Stradivarius (on the right hand side). I had not heard the Stradivarius before, so I definitely wanted to take a listen. Now keep in mind, there is a wall to the right of these speakers, and a lot of space to the left. Virtually nothing, because there is another system set up over there. This system appeared as though someone in sales (that might not have been the sharpest tool in the shed when it comes to set up) said, the customers need to see both systems. The more expensive should be most visible, but both should have equal space and equal set up. Then (it appeared) they just plopped the speakers and rack down where it looked good. There was no acoustical treatment (unless you count the drapes on the wall behind the speakers-but nothing on the side walls). So the obvious conclusion would be a terrible imbalance from left to right. Well, you know I probably wouldn't have written about it if that were the case. I was really shocked by a few things. One, the speakers were very musical and really drew me in to the sound, but what was really amazing was that they sounded perfectly balanced if they were in a symmetrical environment. Some day I want to measure these speakers myself. My subjective impression would have me believe the off axis response falls off dramatically. However, most speakers with this quality do not image once you get just a hair out of the sweet spot, and these performed very well even when you sat a foot to the left (the right did exhibit slightly more loading on the midbass). So, either they got incredibly lucky on the setup, or I think someone was very familiar with the speakers and how they would perform in the environment and set them up accordingly. This is an example of the benefits of working with a full service dealer that is knowledgeable on equipment setup.

A few other rooms did pay some attention to acoustical treatment. ESP is back in business if you didn't know and from what I heard particularly on the smaller pair of speakers, they are going to get some very good acclaim. One thing to note about the ESP is that they have two tweeters. One is side firing and 10 db down. In the room with smaller set they had used several items, but the blankets on the walls to reduce first reflections (somewhat difficult to see in the photo), back wall reflections, and tame the side tweeter a bit, worked quite well. They did have a bass issue, but that was the typical room mode problem and I'm fairly certain in a more acoustically friendly environment in terms of room dimensions and modes, the bottom end performance would be quite good.

Lastly was one group that really impressed me in terms of their ingenuity to get good sound at the lowest possible cost. I always like people that can achieve this and feel like there should be an award at shows for this. This room had very efficient and rather large horns for the size of the room-the Dodwylama. I'm quite certain they could overload the room in no time. So what did they do to deal with their acoustic delimna? This group brought in no less than 7 mattresses from the hotel to absorb and damp the room. Most of these you can't see from the photograph as they were in the back half of the room. The hotel was probably happy because they were trying to figure out were to store all those mattresses from all the audio rooms that had the beds, mattresses, and other furniture removed. Heck, if these guys were smart they got the hotel to give them a discount for storing their mattresses for them.

What I didn't see: I didn't see any RPG vari-screen product. This is used regularly for show venues. It is absorptive on one side and diffusive on the other. It is the most flexible show acoustical treatment product out there. However, it's very expensive and very heavy (adding more expense to shipping and set-up). So the reasons I didn't see it are not surprising, but it seems to me that anyone setting up a room for consumers or trade for sound need to have an "acoustical agenda". Meaning, they need a game plan on how to deal with the potentially terrible acoustics of a hotel room, and particularly in a show like this that no one has gone to before. The vari-screen in my mind is a clear choice in terms of flexibility and solving multiple problems. But the "mattress" plan really got my attention for most cost effective and convenient way of dealing with the problem. Wonder how many mattresses we will see at the next show?

I also want to thank Ron Welborne, of Welborne Labs, for being just naive enough to run a show like this. He had no idea the work involved, and I know he worked hard because the show went off beautifully and I hope it will return next year. Ron also invited me to speak at the conference. I gave 3 separate lectures on acoustics and did one panel discussion with Steve Hoffman and Robert Harley. I was pleased that the room was standing room only, but was even more pleased that Ron had the forethought to have lectures on acoustics at this show.

Note: I heard many good speakers and systems at this show. Many are not mentioned just because this article was focused on what people did with regard to acoustics and set up.