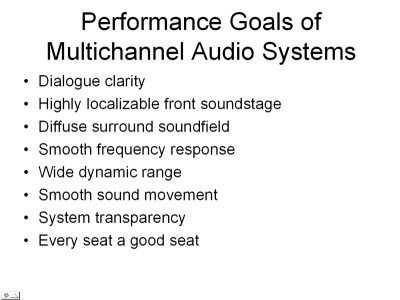 Taught by John Dahl of THX

John Dahl has been a volunteer instructor for CEDIA for the last 11 years. So it's a pretty good bet that virtually all of the CEDIA design and installation professionals who have passed through his classes have been taught Home Theater theory, design and calibration from the perspective of THX's recommendations. And those THX recommendations have themselves have been distilled into practical acoustical measures for the home theater which THX has championed for the several hundred commercial theater certifications worldwide.

To understand the how's and why's of THX recommendations it is first necessary to talk about the physical nature of sound, how that sound changes once it is trapped in a room, and how it can be controlled. That was the course objective. Going into this 8AM course I had told myself to not let the early hour allow me to pay less attention. Wise choice. John started right off with the "Performance Goals of Multichannel Audio Systems".

Key to all discussions of home theater is a common goal: that the audio surround system must be capable of supporting a "willing suspension of disbelief". It starts with the center channel which carries over 70% of the movie's dialogue and must transfer seamlessly to the "highly localizable" left and right channels when they are employed, for instance, in smooth pans across the front soundstage.

To the rear, the surrounds must be capable of a diffuse soundfield which can satisfy the feeling of "immersion". At the same time though, through careful use of DSP and speaker placement the entire system can be tuned and calibrated to satisfy the oft times dual roll of supporting movies or games.

Finally, John pointed to the last requirement "every seat a good seat" and I was wide awake. It sounded to me that he'd have to cover a more than the "basics" of sound to be able to satisfy so many criteria within a single room.

Most audiophiles believe "the goal" of a high performance home theater set-up is to achieve 20Hz - 20KHz bandwidth. That's easier said than done. But what if that lofty 20Hz to 20KHz capability isn't really all that necessary 99% of the time? John stated that "everyday sounds" usually fall between 40Hz and 12,000Hz. He's correct. 40 hertz is open fret on the E-string of a bass guitar. Twelve thousand hertz is roughly the third harmonic of the highest fundamental frequency on a piano which is C7 at 4186Hz. Get beyond the third harmonic to the fourth at 16,000Hz + and the level of that harmonic is now around -20dB below the 4186Hz primary frequency.

This is why, once frequencies start getting over 12KHz, reviewers start describing the sound with terms like "air around the instruments". To be sure, the difference can be heard. But it is very, very subtle and requires a listening environment with an extremely low noise floor.