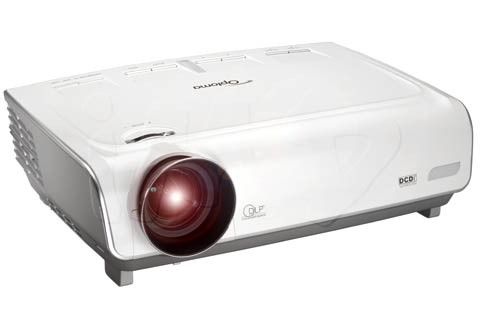 We were first introduced to the new Optoma HD72 in January at the 2006 Consumer Electronic Show. We were very interested in conducting a review of this projector based on what we viewed at the Optoma booth. The new Optoma HD72 breaks the price barrier for 1280x768p DLP projectors, selling at just $1999 MSRP. Our friends at Projector People were kind enough to lend us a demo unit for the purpose of this review.
Next Page ⇨

RLA Home Theater and Hi-Fi began as a hobby and has expanded into a business. Ray took his love of music and movies and turned it into his personal business to bring movie theater sound and quality into the homes of his customers. Ray brought great knowledge and expertise to us from a custom installer/integrator's perspective.

Jay,
Any fixed pixel display (LCD, Plasma, Front/Rear Projector, etc.) will convert the incomming signal to its native resolution (720p in the case of the Optoma HD72). The reason for an upscalling DVD player is that you can feed the display its native resolution and some players like the Oppo have much better conversion chips than the ones bulit into the display.

Also, check out the beginners section of the site for plenty of good articles on A/V components and systems.
Jay001 posts on August 16, 2006 13:06
Up-Conversion

Hi all,
Need some help again! Wow, do I ever have a lot to learn.

I am wondering if the HD72 does any type of up-conversion of DVDs? I have an older DVD player and would consider getting one of the newer up-converting ones, but if the projector already does this then what would be the point.
Thanks for any input.
Cheers,
Jay
Jay001 posts on August 15, 2006 14:10
Costco.ca/costco.com

Kevin, thanks for your input.

David, I found this link on the AVS forum which seems to work quite well.
http://www3.sympatico.ca/brendan.hennessy/pics/hd72calc.xls

It's an excel spreadsheet which takes everything into account.