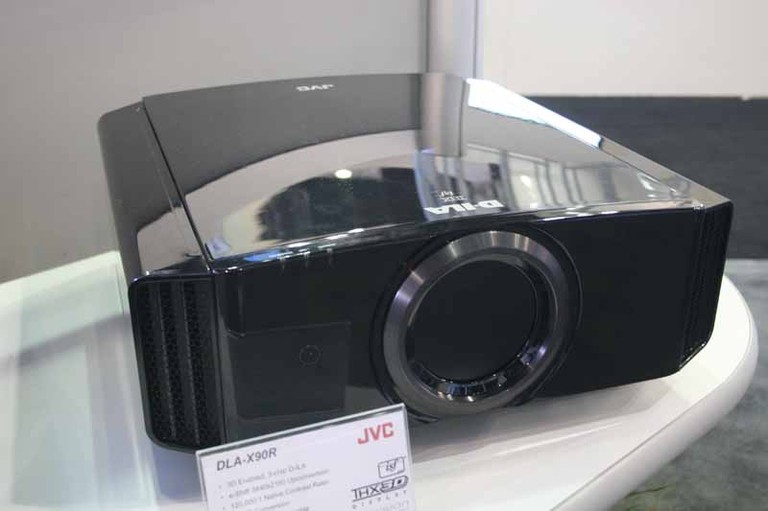 JVC came to CEDIA with a sort of braggadocio attitude. They spoke out a little on dynamic iris contrast ratios since they can't do both black levels and high output at the same time. Their answer to this was to demo material on their $11,995 DLA-RS65 reference 3-chip projector with e-shift technology. e-Shift is what JVC is using to accomplish it's pseudo-4K projection, which is intended to upscale 1080p content (which, incidentally, is about the only way anybody is going to see 4K at home in the near future). While Sony's demo utilized an actual 4K panel (albeit rather unimpressively in our instance), JVC uses electronics and video processing to establish 3840 x 2160 4K resolution by shifting the image half a pixel up and to the side at 120Hz. Where JVC might have overextended themselves is that they enhanced the lumen output of the DLA-X90R by using a 127" diagonal Stewart Reflections 170 screen material which provides 1.7 gain. The result were lots of sparkly hot spots on the screen whenever pure white was shown.

Demo material included clips from Legend of Guardians and also a 3D clip of IMAX Under the Sea which showed a beautifully detailed scene of a Potato cod. The footage was originally shot as 4K video footage which was then mastered to Blu-ray and then unconverted by e-shift back to 4K. I have to admit, the e-shift technology does seem to work well. Over-brightness aside, the detail was phenomenal on the displayed picture. I'm certain native technology is going to win out, but for JVC to hit these price points so early in the game and deliver 4K and 3D - that's pretty astounding.

We also loved that all of JVC's new 3D-capable projectors offer the company's 2D-to-3D conversion. This is based on the $30,000 commercial 2D-to-3D converters. It's incredible to see how well the content could be made to work.

In addition to the above features, the DLA-X90R is pending THX 3D certification where 400 laboratory tests are conducted, evaluating color accuracy, cross-talk, viewing angles and video processing. The projector also has ISF certification, and its new e-shift technology produces a 1/16th pixel shift function to precisely tune convergence via 121 adjustment points (11 vertical x 11 horizontal) and an increased number of screen mode preset positions, up to a maximum of 255. On top of that, an upgraded optical engine improves the black level and native contrast of this projector over former models. The JVC DLA-X90R uses three Xenon lamp color modes that is designed to emulate the characteristics of high-end movie projectors. A lens memory function lets the projector store 3 memory settings a custom focus, and zoom and horizontal/vertical lens shift position. What this does - and this was a new trend this year with many projectors - is allow a constant height display of 4:3, 16:9 and 2:35 scope content without the use of an additional anamorphic lens.

For 3D viewing, the DLA-X90R comes with two pairs of 3D glasses and a PK-EM1 3D Signal Emitter. The projector also has a 3-year warranty.

In addition to the JVC PK-AG1 active shutter 3D glasses currently available, JVC announced new glasses – the PK-AG2, which are more compact, lighter and rechargeable. The PK-AG1 glasses remain available and are ideal for use over eyeglasses.  Both models are compatible with the currently available PK-EM1 3D Signal Emitter.

Read the Complete Thread
BMXTRIX posts on September 28, 2011 10:00
With JVC I wouldn't go much bigger than a 120" minimal gain white screen. No reason to be using a grey screen unless your room sucks. In which case, get something other than a JVC projector as the blacks will be lost on you.

Reading things, I have a very hard time justifying any and all 4K hoopla. There is no content at all in this format, and absolutely no need for it.

jnr: Save your money. If you want a good JVC projector, then get their RS45 or RS55 for thousands less, enjoy it for a few years, then you will see when/if 4K has a real market, and you will see 4K projectors at half the price they are now.

In anything other than perfect conditions, I would bet most people won't be able to tell them apart.
jnr posts on September 28, 2011 04:20
Jvc dla-x90r

Can someone recommend the Optimum Screen for this new Projector ?

I already have a Stewart Grayhawk RS 110“ Diagonal but this was before HDMI and 3D was launched .

Should i stay with 110” or go bigger ?
Throw distance is 6m from ceiling location .

JVC's booth was somewhat dead. Their demo presentation was the worst - by far - compared to Epson & Sony. I did like the fish 3D content they showed, however all of the other things packed into the (roughly) 12 minute demo was virtually useless. The “4K” (yeah… I used air quotes when i typed that) stuff they demo'd was virtually all still shots of yarn & thread. No wow factor.

Underwhelmed is how I left their booth.
Post Reply