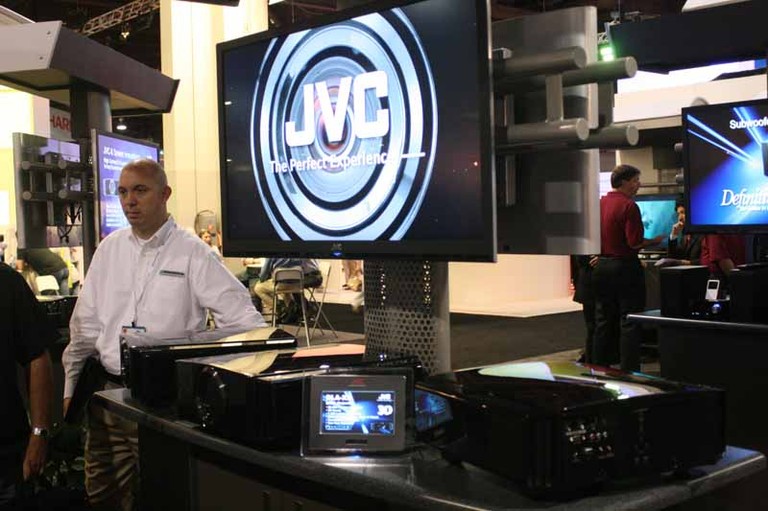 We stopped by JVC's booth today and saw their six new 3D-enabled D-ILA projectors. All six have impressive native contrast ratios, and the top model is spec'd at 100,000:1. The new projectors are the Reference Series DLA-RS60, DLA-RS50 and DLA-RS40, to be marketed by JVC’s Professional Products Group, and the Procision Series DLA-X9, DLA-X7 and DLA-X3, to be available through JVC’s Consumer Electronics Group. For 3D content, each projector includes two HDMI 1.4a ports and supports side-by-side (broadcast), frame series (Blu-ray), and above-below 3D transmissions. An (optional) external 3D Signal Emitter (PK-EM1) syncs the projected image with JVC’s Active Shutter 3D Glasses (PK-AG1). The system is designed to be flexible and universal - which is good considering JVC's penchant for being OEM'd by other manufacturers (simply because their technology looks so good). With technology this good, we wondered why the company showed off its new technology on an SI Screens system. The gray screen technology artificially inflated the perceived black - great if you think yu can ool everyone, but for those of us who wanted native and real numbers, we'd have to wait to see it later. The other thing we thought was funny was that the first 5 minutes or so of the resentation was a multimedia "me show" of Epson's history and technology.

The new flagship projectors, the DLA-RS60 and DLA-X9, are - according to JVC - built using hand-selected, hand-tested components and provide a 100,000:1 native contrast ratio. For 3D display, both models come with two pairs of 3D glasses along with a PK-EM1 3D Signal Emitter. Both projectors also have a three-year warranty.

The four top models – DLA-X7/DLA-RS50 and DLA-X9/DLA-RS60 – have been designed to achieve THX certification (Pending) and are in the process of being tested by THX. They are also licensed by ISF to carry their certification and will include an ISF C3 mode for professional calibration.

The new JVC D-ILA projectors will be available in late November at the following prices:

About JVC U.S.A.
Headquartered in Wayne, New Jersey, JVC U.S.A. is a division of JVC Americas Corp., a wholly-owned subsidiary of Victor Company of Japan Ltd. JVC distributes a complete line of video and audio equipment for the consumer and professional markets. For further product information, visit JVC’s website.

Can someone give me Store details in New York City , where i can purchase one of these JVC Projectors ?
I'm still undecided on which model ?
Is the X9 worth the extra $4000 over the X7 ??

Any reply greatly appreciated
thanks
John
mozi121 posts on May 23, 2011 03:06
I was able to get the RS60 right up there with the Sony but still with football the Sony has the slight edge. Mainly because of motion. I can live with the JVC since it does 2D Blu ray very well and is amazing (or the best I have see so far) with 3D. As for the 50 versus the 60… I would think they would be very close. Of course the 60 guarrantees the best parts and most likely top notch convergence. The one I have is the best I have ever seen. Not to mention with the “little” extra native contrast the image would probably appear a little sharper. I can say this 60 looks sharper than the 40 I had here. Pricing is a huge consideration for many as well as myself though. I bet I could get a 50 to come close to a 60 (overall at least). I do plan to get this ISF calibrated when the hours climb up some so I will post the results and best measurements.
rengasamy posts on April 23, 2011 10:08
Jvc dla x9/rs60

I recently bought JVC DLA RS 60 3D projector, it is Excellent and Superb quality both 2D and 3D images are excellent, there is no other projector for comparison todate. If u have extra money one should go for this it is worth every penny.
Franin posts on September 27, 2010 10:19

Seth=L, post: 754667
They need to stop pushing it, because they're going to exaust themselves wasting their time/money with it.

I have to agree. I guess there trying to get 3D in every house but I cannot see that happening especially with this economy the way it's going. DVD is still stronger in sales than blu ray at the moment, so it shows the demand isn't even there for HD at the moment either let alone for 3D!!
Post Reply