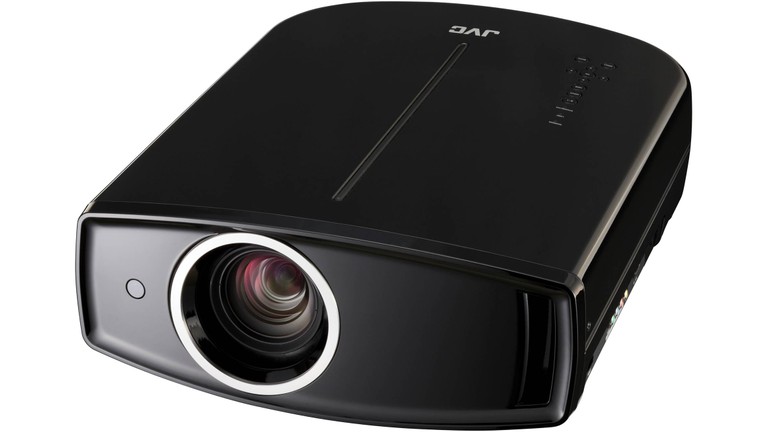 JVC showed us their low-cost home theater projector that delivers fairly advanced D-ILA technology at an entry-level price. The new projector, to be marketed as the DLA-HD250 by JVC Consumer and the DLA-HD250Pro by JVC Professional, is priced below $3,000 and delivers 25,000:1 native contrast ratio and 1,000 ANSI lumens brightness.

Other features include a high-performance 2x motorized zoom lens with auto dust cover, as well as on-screen, customizable gamma control and ultra-quiet (19dB) operation. While ideal for use in a dedicated home theater, the DLA-HD250/250Pro is also suitable for brighter environments, such as great rooms or bar and restaurant installations, thanks to its 1,000 lumens of brightness.

"JVC projectors have been widely acclaimed for their performance, but they’ve remained out of reach for home theater enthusiasts with a limited budget. With this new projector we bring D-ILA’s remarkable film-like image quality and impressive native contrast to an entirely new market segment."

About JVC U.S.A.
Headquartered in Wayne, New Jersey, JVC U.S.A. is a division of JVC Americas Corp., a wholly-owned subsidiary of Victor Company of Japan Ltd. JVC distributes a complete line of video and audio equipment for the consumer and professional markets.

kiwiaudionut, post: 776208
Hi Audiofox, please tell me a little about your setup - Throw distance, screen width etc. My intended throw will be around 19' onto a 120-130" Seymour center stage Xd screen. Even though my setup will be in a fully light controlled room, I'm concerned about light output at these specs enough that I want to demo, but i might be out of luck for realistic travel distance.

My room has blackout shades but is not fully light controlled, as the walls are painted with flat paint but are a medium tan color (ie, no velvet walls). I have two torchieres that provide general and indirect lighting and usually can leave one of them on when viewing non-critical programs (ie, sporting events and other TV shows from my cable box). I project onto a Da-Lite Model B 92" 16x9 screen with a screen gain of 1.1 (high contrast matte white material). The projector throw distance is at the upper limit of around 18 1/2 feet (possibly a bit more) with slight right and upper offsets from the screen center (corrected with the lens shift). The projector is noticeably brighter than my old Panny AE900, but the bulb is still fairly new and has not experienced much, if any degradation in the lamp output yet. Hope this helps you with your decision.
AVRat posts on January 01, 2011 13:56
https://clevelandplasma.com/store/projectors/jvc/jvc_dla_hd250
kiwiaudionut posts on December 31, 2010 21:23
Ok, by that definition, I guess my room is not fully light controlled. I should have said that i have zero ambient light maybe !
I'm struggling to find the JVC and i'm getting no response for dealer location requests.
If I can't find one to demo, i'll probably go with the Epson. There is a lot of local support for those.
jostenmeat posts on December 24, 2010 19:08

kiwiaudionut, post: 776208
Hi Audiofox, please tell me a little about your setup - Throw distance, screen width etc. My intended throw will be around 19' onto a 120-130" Seymour center stage Xd screen. Even though my setup will be in a fully light controlled room, I'm concerned about light output at these specs enough that I want to demo, but i might be out of luck for realistic travel distance.

There are at several of us with the XD and large screen. There are at least a couple of us with JVC particularly, with the screen size you're looking at, actually both are 126“. Mine is the one that started it all with JVC, the RS1, and the other is the extremely nice RS35.

I can't even call my own fully light controlled, but as BMX might ask you, do you know what that means? It's not just blocking out sunlight, but the in room reflections from your PJ. The only way I can see being ”fully“ controlled is if EVERYTHING was covered in *velvet*, as even flat black paint still has plenty of reflectivity in comparison. That said, there are indeed a decent amount of consumers with medium colors and this size of screen.

http://forums.audioholics.com/forums/showthread.php?t=36461&page=76
AVRat posts on December 24, 2010 14:00
It won't be super bright, but you should see about 16fl - 18fl, with theaters spec'ed at about 12fl. With the longer throw, you'll have better contrast aided by less brightness resulting in deeper black level.
Post Reply