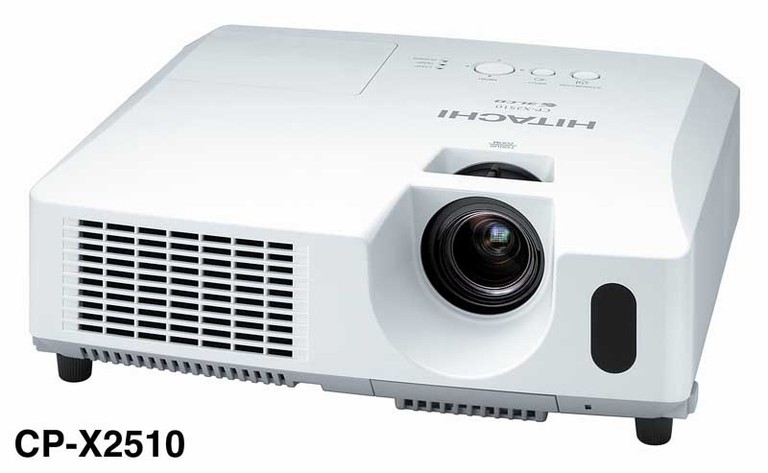 Hitachi's CP-X2510 projector is an excellent value and a great performer. With a street price under $700 this is a go-to model for anyone not requiring DVI or HDMI connectivity. It's an incredible bargain given its featurs and quality. It is bright, crisp and has the flexibility to be used in a myriad of situations. The Keystoning capability and color controls means that power users will be able to successfully dial it in for presentation use with little difficulty. The business/classroom and house of worship market has a barrage of LCD projectors to choose from, the key is finding the best solution for your needs. Removing the CP-X2510 projector from the box did not reveal much difference from the typical business-class projector. I was interested to see if some of the latest advances in the residential market had been translated to the corporate side. It turns out the business projector market has its own surprises.
Next Page ⇨
Like This? Check out our other Home Theater Projector Reviews!

Read the Complete Thread
lsiberian posts on August 26, 2009 15:03
$700 for a PJ without DVI-D compliance is highway robbery. MY 3 year old business class projector is better than this and I got it for far less cost.

Why not highlight the Optoma HD65 instead since it's a low cost home theater solution? Or the new 1080p Optoma that's around 1000 bucks.

I question the merits of Ah doing reviews on Business projectors. Maybe this is your new office projector, but I'm not impressed.

I don't like being a downer, but this was a waste of time IMO.
BMXTRIX posts on August 26, 2009 14:48
You know I'm going to read almost anything which AH posts related to front projection and I'll definitely point out a gripe or two, but this is one of the better score sheets I've seen.

As always, I wish that more time would be spent going over the impression which the reviewer had of the projector which has been tested. What things were set to, how the setup was done.

Using a widescreen laptop typically has no impact on the projector if the desktop is extended for use instead of mirroring the main monitor. You throw away a lot of pixels when going to a 16:9 mode.

Likewise, it would have been nice to have some information about how video had performed and the flaws associated with using a business projector for home theater usage which is something many people, especially people that visit this website, will wonder about.

I agree that the performance of this projector sounds like it falls in line with the middle of the road and is VERY common to almost every single other business class LCD XGA projector under $1,000 which is currently on the market.

A five star value I would question - as I said - it is not unique anymore, or special, or a nice value, to get a $700 XGA projector.

What makes this one such a 5 star value considering the very average performance?

I really am just wondering because the review doesn't really cover what sets this projector apart from the other 49 XGA projectors which seem to fall into the same category.

I would say that a value projector worth 5 stars would need to include a digital connection with HDCP on it at the very least - and keep the price under $700.

of those, the Sharp & the Boxlight both carry three year warranties, which I would consider more important for business use.

I think I'm always going to give these reviews a bit of a hard time because there are so many reviews which cover 5+ pages of good reading with tests and such while these projector reviews tend to run pretty thin. I would love to see some additional information and personal insight from you guys and I think others would as well.

NO HDMI OR DVI = No digital connectivity. While not critical this year, the word is that in 2011 Blu-ray will be dropping analog outputs for HD resolutions on players. Likewise, no upconversion of DVD is available over component connections.
Post Reply