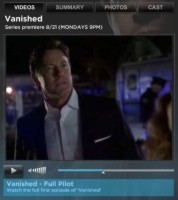 Santa Monica, Calif. ­ August 23, 2006 - Yahoo! TV, the ultimate online destination for television news, information and exclusive content, today announced the launch of its Fall 2006 TV Preview . The site gives TV fanatics exclusive access to complete premiere episodes from some of this year¹s most eagerly anticipated network series, as well as show clips and features from each of the broadcast networks.

New series premiering exclusively on Yahoo! TV include Jericho from CBS and Heroes from NBC. Rounding out Yahoo!s selection of premium television content, the site has launched with the pilot episode of the FOX series Vanished and the season two premiere of Prison Break following their respective network premieres.

Offering Yahoo! users access to content from new and returning shows is part of our ongoing efforts to give people the most entertaining and engaging online programming possible, said Karin Gilford, general manager, Yahoo! Entertainment. As people watch more video content online, we look forward to continuing our collaboration with the TV networks to provide users with the highest quality TV-related content on the Web.

In addition to exclusive online premieres, Fall 2006 TV Preview visitors have access to tools and features that make navigating through all the new shows and their favorite shows easier than ever. Comprehensive schedules and information on the hottest new shows are matched with exclusive clips and sneak peeks that let viewers make an informed decision on what shows are a must-see.

About Yahoo!
Yahoo! Inc. is a leading global internet brand and one of the most trafficked Internet destinations worldwide. Yahoo! seeks to provide online products and services essential to users' lives, and offers a full range of tools and marketing solutions for businesses to connect with Internet users around the world. Yahoo! is headquartered in Sunnyvale, California.