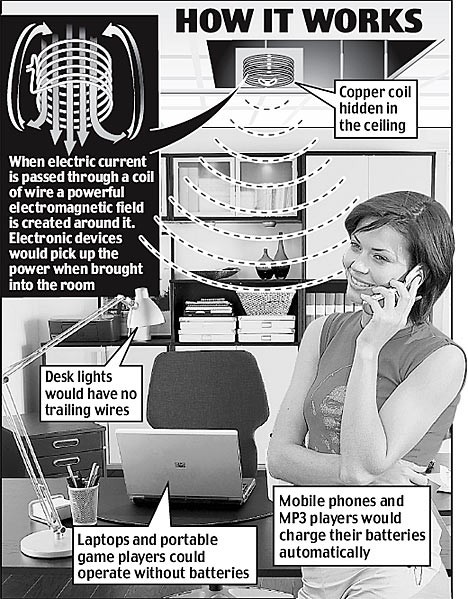 We knew it was just a matter of time. Wireless electricity. Next will come transporters, food replicators and then, finally, the holodeck - and you know I'm never leaving my house once that arrives. A group of scientists at MIT have demonstrated what they are tentatively calling "WiTricity" - the ability to send significant amounts of electricity through the air without the use of wires. For many this has been the holy grail of achievements and could signal a new revolutionary wave of development in the consumer electronics industry.

According to an article over at Daily Mail:

"The inspiration came when the lead researcher, at the Massachusetts Institute of Technology, Dr Marin Soljacic, was standing in his kitchen at night staring at his mobile phone.

It was probably the sixth time that month that I was awakened by my cell phone beeping to let me know that I had forgotten to charge it. It occurred to me that it would be so great if the thing took care of its own charging," he said.

The concept works by using the principles of electromagnetic induction where you pass electricity from one coil to another. It's a transmitter/receiver arrangement of sorts and is already being used in many applications today - except that typically the transmitting and receiving coils need to be very close together. In WiTricity, the system basically fills the room with a 'non-radiative' electromagnetic field. To objects that aren't designed to resonate with the field (plants, desks, walls, your grandmother Lois) the field simply passes by harmlessly and is ignored.

But if you design an object to absorb the energy by resonating with the field then you get a result that is about as close to magic as we will experience in our lifetimes. Using 2 copper coils, the MIT team transferred power over 7 feet to light up a light bulb - which lit up instantly. Let me rehash this - using only a copper coil (of sorts) as the sending device, a group of scientists actually delivered wireless power (about 60 watts worth) over 7 feet away!

So far they claim to be able to accomplish the feat at up to 9 ft. Eventually they think they can go up to a few yards to devices connected to a receiving coil. The possibilities are endless. Since the transmitter and receiver need not be in view, you can mount the device in a ceiling, conceivably activating an entire room in an electromagnetic field that will power everything in it - all without harming anyone in the room... well, you may not be able to have any children - but your laptop will work without a battery!

Unlike the Segway, WiTricity would be a technology that would simply revolutionize the world, how products are built and developed and how public and private establishments are created. If wireless power becomes a reality then consumers are looking at a brand new world of technological connectivity and possibilities that have not yet been realized in the world. More than a few scenarios come to mind:

With regards to safety "The researchers believe there is little to worry about on safety grounds, saying that magnetic fields interact weakly with living organisms and are unlikely to have any serious side effects." I've heard this before, however I would probably still posit how much research will need to be done in order to convince people that this isn't the equivalent of bringing the local power station into your home. Avoiding unnecessary exposure to electromagnetic fields just seems to be common sense and it will take some convincing (I would believe) before many people will be willing to accept the responsibility of reworking the public infrastructure to encompass this type of technology.

Now, who's working on that holo deck?

Do you think this WiTricity thing will have any practical aplication?
How would it be used in Witric products?

Witrics is what you call everything pertaining to WiTricity.

here is the BBC link if you don't know what I'm talking about.

http://news.bbc.co.uk/2/hi/technology/6725955.stm
skizzerflake posts on June 11, 2007 22:33
These things would not have to be dangerous. The very idea that makes the thing work depends on being able to control the magnetic field so that it concentrates on the gadgets and not on spreading waves all over the place. At the worst, they wouldn't approach the stray field dangers of a hair dryer or electric range. We've gotten so used to those that they don't even bother to put a sticker on the range telling you not to sit on it while it's on. Those fears seem to have diminished of late (perhaps because of the complete lack of compelling evidence). People have much better reason to fear their obsessively used cell phones, which they old up to their brains.
stratman posts on June 11, 2007 08:55
Oh man I can just see attorneys everywhere licking their chops, some kid gets a pimple on his butt and somehow it'll be connected to this, if your canary dies, guess what? It was inviso-electric's fault. Oh yeah, I can just see what's coming down the pike.
emorphien posts on June 11, 2007 01:25
I have trouble believing it would be that hazardous for a hard drive.
skizzerflake posts on June 10, 2007 22:36

BradB, post: 274977
Image a room where anyone could bring a laptop and if that laptop had a special coil to receive current, they could leave the room with the battery charged. But either way, it would erase the hard drive.

It wouldn't be too hard to shield a hard disk against the field that does the charging.
Post Reply
About the author: