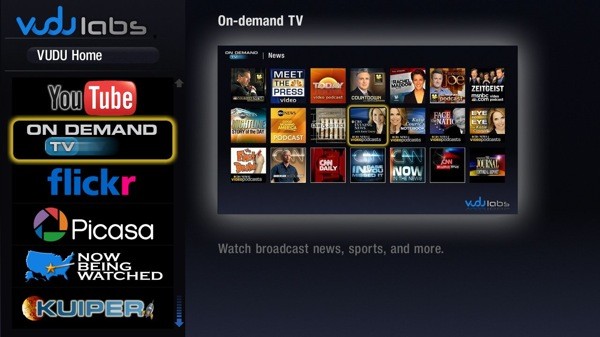 In a surprising announcement, Walmart announced today a definitive agreement to acquire VUDU, Inc., a leading provider of streaming digital technologies and services that enable the delivery of entertainment content directly to broadband high-definition TVs and Blu-ray players. The deal is expected to close within the next few weeks. VUDU's service, built into a growing number of broadband-ready TVs and Blu-ray players, delivers instant access to thousands of movies and TV shows directly through the television. Customers with broadband Internet access and an Internet-ready TV or Blu-ray player can rent or purchase movies, typically in high-definition, without needing a connected computer or cable/satellite service. New movies and features will be added continually, enabling customers to enjoy a product that continues to become more robust long after they have left the store.

With Walmart acquiring a hardware/software company like VUDU, it begs the question: How rapidly will the market giant begin to enter the streaming media world en masse and start to shift the way consumers view and consume digital media?

"The real winner here is the customer. Combining VUDU's unique digital technology and service with Walmart's retail expertise and scale will provide customers with unprecedented access to home entertainment options as they migrate to a digital environment."

VUDU has licensing agreements with almost every major movie studio and dozens of independent and international distributors to offer approximately 16,000 movies, including the largest 1080p library of video on-demand movies available anywhere. Via their broadband Internet connection, users have the ability to rent or buy titles and begin viewing them instantly.

Walmart's penchant for leveraging its buying power poses an interesting thought: Will they use their power to lower the prices of media to levels that will jump-start the streaming media feeding fenzy? To-date streaming services have not taken off like the digital audio download revolution that exploded with the introduction of the iTunes music store. With Apple also working on studio negotiations for movies and television shows, there's no end to the conjecture and possibilities in store for consumers over the next year.

VUDU will continue developing entertainment and information delivery solutions such as VUDU Apps, a platform that delivers hundreds of streaming Internet applications and services to TVs and Blu-ray players with built-in Internet connectivity. VUDU has partnered with some of the leading names in Internet and media entertainment to offer applications on its platform including Facebook, Flickr, Twitter, The New York Times and The Associated Press.

"We are excited about the opportunity to take our company's vision to the next level," said Edward Lichty, VUDU executive vice president. "VUDU's services and Apps platform will give Walmart a powerful new vehicle to offer customers the content they want in a way that expands the frontier of quality, value and convenience."
VUDU, based in Santa Clara, Calif., will become a wholly-owned subsidiary of Walmart. The company is not disclosing financial terms of the agreement as the acquisition is not material to its first quarter earnings for fiscal year 2011.

About Walmart
Wal-Mart Stores, Inc. (NYSE: WMT), or “Walmart,” serves customers and members more than 200 million times per week at more than 8,400 retail units under 53 different banners in 15 countries. With fiscal year 2010 sales of $405 billion, Walmart employs more than 2 million associates worldwide. A leader in sustainability, corporate philanthropy and employment opportunity, Walmart ranked first among retailers in Fortune Magazine’s 2009 Most Admired Companies survey. Additional information about Walmart can be found by visiting www.walmartstores.com. Online merchandise sales are available at www.walmart.com and www.samsclub.com.

Seth=L, post: 689859
Wal-Mart is pretty adaptive, let's see how this plays out before we jump to conclusions.

When it comes to an “electronics” company like Walmart, I would rather jump to conclusions. I actually hope it fails so that Walmart wastes money.
Seth=L posts on February 23, 2010 09:45

Wal-Mart is pretty adaptive, let's see how this plays out before we jump to conclusions.
Post Reply