Vizio Unleashes Android Smartphone and Tablet with VIA Plus 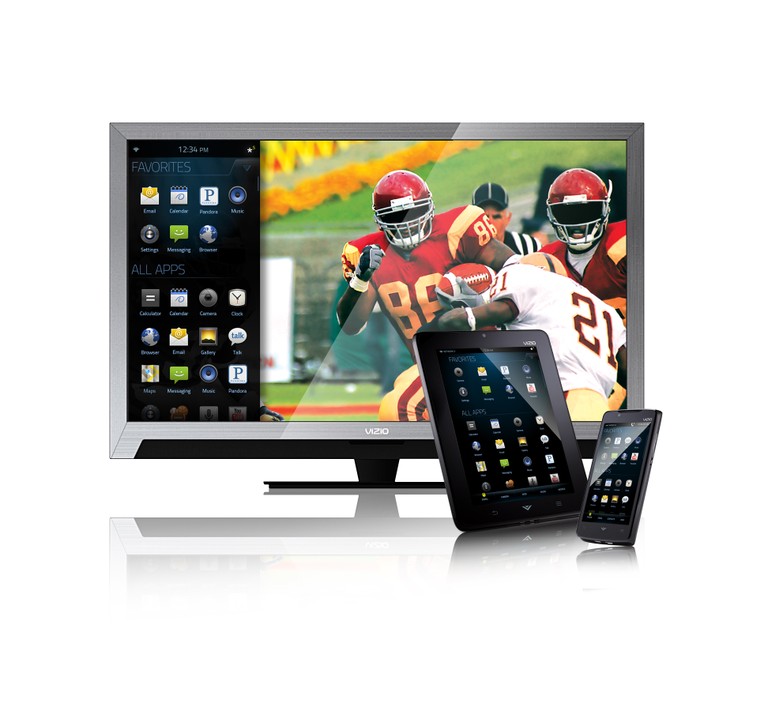 VIZIO announced today the VIA Plus ecosystem, the next generation of VIZIO Internet Apps that will provide consumers with a connected CE experience unlike any other.  The new ecosystem will allow for unified on-demand content and application consumption across multiple consumer electronic devices including VIZIO HDTVs, Blu-ray players, SmartPhones and Tablets.

VIA Plus expands upon the VIA experience and extends it to new devices creating a world-class connected ecosystem that combines the latest technologies and a unified user experience to provide the very best HD entertainment experience. Consumers will be able to begin content consumption from one device and seamlessly transition the content to another device allowing entertainment to be continuously enjoyed anywhere and anyplace without interruption.

VIA Plus HDTVs and Blu-rays will incorporate Google TV and feature a premium Bluetooth QWERTY universal remote with touchpad, dual-band 802.11n built-in wifi and enhanced onscreen navigation including search and web browser.

"The promise of a unified consumer experience across multiple screens and devices has been unfulfilled until now. With VIA Plus, VIZIO is delivering the first true integrated ecosystem across multiple classes of devices and enabling a simple yet powerful interface for consumers to enjoy their applications, services, and content."

The VIA Plus Phone and Tablet will be based on the Android Platform and feature built-in IR blaster with universal remote control app, HD playback with HDMI output, and access to hundreds of thousands of apps in Android Market.

"In the upcoming era of connected digital devices, we believe the companies that stand the best chance of success are those that realize the consumer experience isn't just about hardware. Rather, it's the integration of hardware, software, and services toward a specific usage model that will ultimately offer a unique and potentially lasting consumer experience," said Richard Shim, mobile computing analyst with DisplaySearch. "One of the usage models that we believe can be addressed most readily is the consumption of high-quality digital entertainment."

VIA Plus Software and Devices

With VIA Plus devices, consumers will be able to search, organize and access their favorite apps more easily than ever. At its core, the VIA Plus experience is a unified, consistent and intuitive user interface that allows consumers in just a few clicks to quickly group favorite apps by categories, customize the dock with their most frequently accessed apps or switch apps with the multitasking bar.

“We know we have tremendous interest and support from our current distribution for new VIA devices, but always are mindful of what the end user wants. With the proliferation of platforms and apps now available to connected devices, navigating and learning different interfaces can be frustrating to end users,” said Mr. McRae. “With that in mind, VIA Plus presents a simple, consistent, and elegant interface so users can quickly access the entertainment they seek on devices from a 4” mobile phone to a 65” Theater 3D HDTV.”

About VIZIO
VIZIO, Inc., "Entertainment Freedom For All," headquartered in Irvine, California, is America’s HDTV and Consumer Electronics Company. In 2007, VIZIO skyrocketed to the top by becoming the #1 selling brand of flat panel HDTVs in North America and became the first American brand in over a decade to lead in U.S. TV sales. Since 2007 VIZIO HDTV shipments remain in the TOP ranks in the U.S. and was #1 for the total year in 2009. VIZIO is committed to bringing feature-rich consumer electronics to market at a value through practical innovation. VIZIO offers a broad range of award winning consumer electronics. VIZIO’s products are found at Costco Wholesale, Sam's Club, Walmart, Target, BJ's Wholesale, and other retailers nationwide along with authorized online partners. VIZIO has won numerous awards including a #1 ranking in the Inc. 500 for Top Companies in Computers and Electronics, Fast Company's 6th Most Innovative CE Company of 2009, and made the lists of Ad Age’s Hottest Brands, Good Housekeeping's Best Big-Screens, CNET's Editor’s Choice, PC World's Best Buy and OC Metro’s 10 Most Trustworthy Brands among many other prestigious honors. For more information, please call 888-VIZIOCE or visit on the web at www.VIZIO.com