VESAs DisplayPort to Compete with HDMI 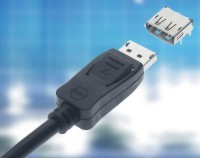 MILPITAS, Calif. - May 3, 2006 - The newly-developed DisplayPort(TM) interface standard designed to unify the desktop and notebook PC markets to a common high-bandwidth display interface has been approved by the member companies of the Video Electronics Standards Association (VESA).

The new DisplayPort standard was developed by a VESA Task Group comprised of leading companies in the display silicon, connector, computer monitor, TV display, projector, and PC industry segments. "With support from these major industry players, we expect rapid adoption of DisplayPort in the PC marketplace," according to Bill Lempesis, executive director of VESA. "DisplayPort will reduce platform costs and drive a common digital interface across PC platforms and components."

DisplayPort allows high-definition digital audio to be available to the display device over the same cable as the digital video signal. It delivers true plug-and-play with robust interoperability, and is cost competitive with existing digital display interconnects. Designed to be available throughout the industry as an open, extensible standard, DisplayPort is expected to accelerate the adoption in PCs of digital outputs enabling higher levels of display performance. When the optional content protection capability is active, DisplayPort will support viewing high definition television, video and other types of protected content.

DisplayPort enables for the first time a common interface for both external and internal display connections within a PC notebook or a desktop display. This approach allows for standardized connections between source devices and display devices, such as LCD panels, without the need for signal translation. This direct drive capability simplifies display product design and reduces cost. DisplayPort may be applied within notebook PCs, and for external display connections, including interfaces between a PC and monitor or projector, between a PC and TV or between a device such as a DVD player and TV display.

The standard includes an optional digital audio capability so high-definition digital audio and video can be sent over the interface. DisplayPort also provides performance scalability so that the next generation of displays can feature higher color depths, refresh rates, and display resolutions. The external connector is small, user-friendly and optimized for use on thin profile notebooks in addition to allowing multiple connectors on a graphics card. 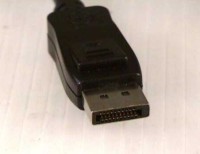 The Main Link bandwidth of up to 10.8Gbit/s, equivalent to a data transfer rate of 1080 Mbytes/second, uses four lanes; the auxiliary channel features minimal delay, with maximum transaction periods less than 500 microseconds.

As higher performance display and source technologies are introduced, the demands on interface bandwidth expand and the problem is becoming ever more acute with requirements for more colors, higher resolutions, and higher refresh rates. The DisplayPort standard's high initial bandwidth is designed to scale to even higher bandwidths to accommodate future display requirements.

Data is transmitted across the DisplayPort interface using a micro-packetized format which provides both high performance and the flexibility to handle the evolving requirements of a high performance display interface.

The DisplayPort standard has available an optional robust content protection system which is designed to meet the unique high-bandwidth requirements of the current and future requirements of high-definition audio and video digital technology. In addition, a compliance program is nearing completion to complement the standard and to assure that solutions will be interoperable and provide a great user experience.