Tributaries , a company formed in 1991 and committed to designing power and interconnect products based on scientific principles and not snake oil, has recently announced the availability of its new TX 500 Power Controller . The first of two power conditioners/controllers/surge protectors is the TX 500, which has been has been issued a certification by Electronic Testing Laboratory (ETL) for compliance with UL® Standard 6500 Second Edition. This ensures that when operated in accordance with the manual, these products meet all the safety requirements of the National Electrical Code. The TX 500 offers:

The TX-500 (and pending TX-1000) are power conditioners, power controllers and surge protectors. As such, Tributaries is using the word "power controller" to describe the units. Each are ETL-certified to comply with UL Standard 6500 Second Edition. If you plug a non-certified device into the wall and something happens and you have a fire, then the insurance company is going to be after the dealer for selling something like that. Tributaries' balanced technology, however, acts like a balanced audio cable in that it rejects noise coming down the line. So anything that's riding on that AC line, from home appliances is automatically removed because of the way the filter works. It looks at both sides of the AC line and whatever's common is automatically removed. So it's only seeing the pure sine waves. 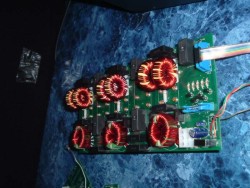 In addition to that filtering, the TX units have three levels of filtering. They have surge protection, but using something called silicon avalanche diodes. It's a new technology that's different than traditional MOVs. The MOV type of product takes surges, but over a period of time they fail because as they take an over-voltage they lose some of their capabilities. It doesn't take too many over-voltages before the MOV circuit fails. And when it fails, the circuit opens, which means the unit doesn't work as a surge protector anymore. The silicon avalanche diode technology actually takes an over-voltage and spins it to ground. If that over-voltage goes over 15 amps it'll blow the fuse, so it's just a fuse replacement. Once you replace the fuse the unit is back in service, and there's no deterioration of the silicon avalanche diode. Moreover, there are 10 outlets on each of the two units, and they are set up so that each pair can be programmed with a simple dipswitch combination, which allows the power switch or the trigger circuit to activate with a five-second delay or with a 10-second delay. So you can ramp up each component, and you can ramp it up at the speed you want it to come on at. This means for those units that have to be left on, like a VCR, a satellite tuner, or a TiVo, they can always be left on.

Tributaries also gave it a retro look. Not wanting it to look like Monster's power unit or a Panamax, or like anybody else's, they did something quite a bit differently. Tributaries added a brush treatment on the front; horizontal heat sinks on top and on the bottom, and meters with blue lights inside them. We also have blue LEDs on the front panel that indicate when the corresponding outlet pairs are on. It's a very simple front panel, there's not much on it. But what's on it is meant to look elegant and nice.

The TX 500 is available immediately from authorized Tributaries dealers with an MSRP of $750.

Discuss this Product in Our Forums