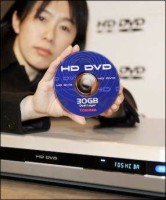 The advance is the latest step in a heated global race to establish a world standard for the next-generation of optical disks, which are expected to offer higher resolution images than current DVDs.

Disc manufacturers, currently producing recordable DVD disks, will only have to make minor modifications to be able to produce the new higher-definition kind, Toshiba said.

In the battle for a high-definition successor to DVDs, there are two technologies competing to become the world standard. Toshiba leads a group that backs the HD-DVD format, while Sony Corp leads a rival group promoting the Blu-ray Disc format.

Blu-ray have greater capacity with 50 gigabytes compared to 45 gigabytes for HD-DVD read-only disks, but proponents of HD-DVD say their format is cheaper to make because the production method is similar to current DVDs.

Discuss This Press Release in Our Forums