The Next Phase in Portable AV Products 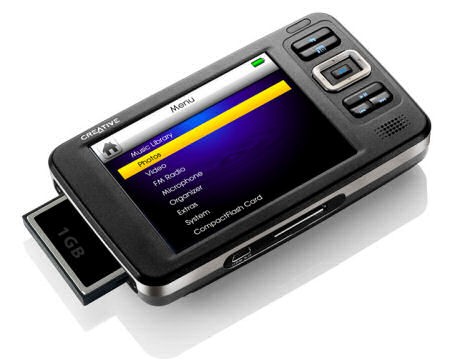 Portable AV Players - the Next Phase

It's not often that I make predictions - and believe me this prediction is hardly epic or even far-reaching, however it's nice to point out trends even slightly ahead of schedule and we see one developing on the horizon.

With the release of newer, faster, cheaper, better, smaller (did I miss any adjectives?) hard drives, the face of portable media may be changing. Portable media? Yes, I believe it's all related...

Take, for example, Samsung's newest 7200rpm premium 2.5-inch hard drive series, the SpinPoint MP1. Samsung’s SpinPoint MP1 Series provides the industry’s highest (current as of this week) storage density of 200 gigabyte (GB) at 7200rpm on a 2.5inch disk base with SATA interface. Now drives like this are designed for "enterprise applications such as workstations, RAID (redundant array of independent drives) servers, and blade servers" however it is indicative of several trends towards smaller and smaller media that contains ever larger amounts of data storage.

It is my contention that the industry is moving in two separate, but compatible directions:

Now I mentioned that these two directions are compatible for a reason. They both offer a potential for subscription services and they both offer two distinct, but not mutually exclusive means of providing entertainment, news and other entertainment. There is no reason why a consumer should not want a subscription service to deliver, for example, a high definition movie to his home theater system and also desire a portable version of the latest television episodic for his commute into work (think subway, not a dangerous car ride!)

Now, why do we bring up Samsung? The simple reason is that through the miniaturization of ALL components within a  chain, including blade servers and massive network (think Internet hubs) storage devices, the industry as a whole is preparing for a new infrastructure which can support the massive amounts of storage needed for extensive content delivery. Remember, advanced technology typically trickles down - and before it is destined to affordably make it into the hands of consumers it must first pass through the hands of more sophisticated implementations.

So back to the portable media - where we started. Spinning hard drives aren't the only place where storage is making a combination leap in capability and freefall in retail pricing. Flash memory is also on board. Lately, 2GB and 4GB  memory can be had at a retail price of almost $0 after rebates. Larger, high-speed Compact Flash is also starting down this trend, and that includes platter-based drives that are fast enough to handle even large amounts of near-instantaneous data transfer, like the kind fed off of 10+ megapixel digital SLR cameras.

As this type of storage becomes more and more affordable (and it's never been cheaper than it is today) the "appropriateness" of portable video is going to become inescapable and consumer demand will go up. Whereas portable video is somewhat of a novelty now, it may be a mainstay in the next few years. This (memory) is just one aspect of what is leading consumers to take up portable media in larger numbers, there are others, but we'll save those topics for later.

I am looking forward to the future of portable AV and we'll keep posting our reactions to various news releases regarding technology advances in the areas of storage, high speed networks and content streaming. The future, it seems, is coming quickly.