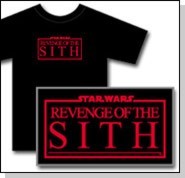 Starwars.com announced this week that Star Wars : Episode III Revenge of the Sith is the full title of the next Star Wars film, scheduled for release on May 19, 2005.

The Sith are masters of the dark side of the Force and the sworn enemies of the Jedi. They were all but exterminated by the Jedi a thousand years ago, but the evil order continued in secrecy. They operated quietly, behind the scenes, acting in pairs - a Master and an Apprentice - patiently biding their time before they could take over the galaxy. In Episode III, they'll finally exact their revenge on the Jedi.

The title was publicly revealed today in a special presentation to a packed audience of Star Wars fans at Comic-Con International in San Diego, California. "For some time now, the naming of a new Star Wars movie has taken on some special meaning among core fans, who love to take part in guessing games before a title is announced, and then engage in debate once it is," said Steve Sansweet, Director of Content Management and Head of Fan Relations for Lucasfilm. "Let the debates begin."

The title wasn't the only surprise for those in attendance at the presentation. Click here for news about even more Star Wars DVDs in 2004 and 2005, surprise celebrity guests, new planets in Episode III, and more...

First Revenge of the Sith T-shirt
At the end of the Star Wars Spectacular presentation, Steve Sansweet revealed he was wearing a special T-shirt bearing the Episode III title, with a style reminiscent of the 1982 Fan Club Revenge of the Jedi logo and shirts available for a limited time before the final Return of the Jedi title was revealed. "If you're interested in one, stop by the shop at the Star Wars pavilion, where they're going on sale just about now."

If you're not at the show, don't worry... you can order your own retro Revenge of the Sith shirt now available exclusively here at StarWarsShop.com .

About Episode III
After three long years of relentless fighting, the Clone Wars are nearly at an end. The Jedi Council dispatches Obi-Wan Kenobi to bring General Grievous , the deadly leader of the Separatist droid army, to justice. Meanwhile, back on Coruscant , Chancellor Palpatine has grown in power. His sweeping political changes transform the war-weary Republic into the mighty Galactic Empire . To his closest ally, Anakin Skywalker , he reveals the true nature of power and the promised secrets of the Force in an attempt to lure him to the dark side.

For the latest updates on the progress of Episode III production, subscribe to Hyperspace: The Official Star Wars Fan Club .

The Complete Star Wars Saga
Episode I: The Phantom Menace
Episode II: Attack of the Clones
Episode III: Revenge of the Sith
Episode IV: A New Hope
Episode V: The Empire Strikes Back
Episode VI: Return of the Jedi