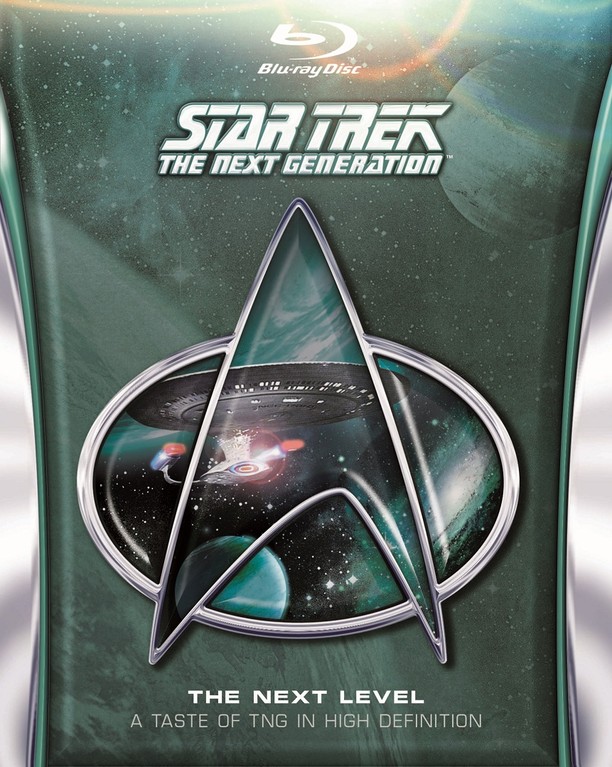 Star Trek: The Next Generation is finally getting a digital facelift seventeen years after the show’s seven-year run. CBS Paramount says it’s pulling out the stops on the show’s HD upconversion that will include digital touch-ups and an audio upgrade with a production that employs some 25,000 rolls of the TV series’ original negatives. It’s the show that never seems to go away and now that new interest has been piqued in the franchise with the 2009 film, Star Trek by JJ Abrams, many are looking for a TV comeback. Meanwhile 20-million plus users of Netflix get their Trek Fix with ad-free streams of every TV series. Fans of Star Trek: The Next Generation will be thrilled to learn that all 178 episodes are coming to Blu-ray… eventually. To whet our appetite however, digitally upgraded versions of select episodes of the series will arrive January 31, 2012. The upcoming sampler platter features three of the series best episodes and according to CBS Paramount - years of labor intensive remastering.

CBS Paramount plans conventional season-by-season Blu-ray releases, but has only said that Season 1 will be released late in 2012. But on January 31 we’ll have Star Trek: The Next Generation, "The Next Level" - an episode sampler to obsess over. What the new upcoming Blu-ray release lacks in content, CBS Paramount promises to make up for in quality with top-to-bottom HD video 7.1 audio and touch-ups to the special effects. The set will include three of the series' most beloved episodes.

Encounter at Farpoint: The two-part episode that kicked off the series in September 1987. Priceless introductions to the new crew including the freshly commissioned Captain of the USS Enterprise, Jean Luc Picard, the show also features the first of many encounters with Q a seemingly omnipotent being played John de Lancie.

The Inner Light: Possibly the best single episode of any series in television history. Knocked out by a probe discovered by the Enterprise, Picard is rendered unconscious for a period of only 25 minutes. In that time Picard is mentally transported to another place and time and lives out the entire life of an astronomer named Kamin on a dying planet. It's a poetically thought-provoking story that might just leave you a little misty-eyed by the end.

The implication of extra-terrestrial communication through consciousness is a fascinating possibility explored by guys like Terrence McKenna. "The Inner Light" earned a Hugo Award in 1993 for Best Dramatic Presentation, the first TV show to be awarded by Hugo since the original Star Trek and its episode “The City on the Edge of Forever" won in 1968.

Sins of the Father: An exchange program brings a Klingon First Officer aboard the USS Enterprise who not only has a problem with Worf, the ship’s token Klingon security chief – but reveals secrets about his family's past. Family revelations send Worf on a quest to clear his family name. Long-time fans know that there’s nothing like a good Worf episode. "Sins of the Father" was honored with an Emmy Award for Outstanding Art Direction.

CBS Paramount is investing a lot into the upconversion of the series to HD. They’re rummaging through over 25,000 reels of the original negatives from the show and transferring it to 1080p. The audio will also be treated to a 7.1 DTS-HD Master Audio upconversion.

There were conflicting rumors about the aspect ratio - but TheDigitalBits and TrekMovie.com have confirmed through a statements from Mike Okuda, consultant for the series working on the Blu-ray conversion, that the aspect ratio will not be changed from the original 4:3 fullscreen. A relief to purists, and yes, if they would have expanded to fit 16:9 aspect ratio it would have looked cheesy.

One of the promising features of the upcoming Blu-ray release is that they’re not simply upconverting the special effects, instead they’ll be recomposited. According to rumors, it's not intended to be a George Lucas–style special effects add-on but a re-rendering of existing special effects to help keep them looking their best in HD which could have exposed flaws if the original effects remained intact.

It's hard to believe it was all the way back in 1987 when the new Star Trek: The Next Generation hit the airwaves. The truth is, I hated it back then. As a fan of the original I was a complete snob about New Trek. But there's no denying that once the series ramped up it became addictive and eventually I was sucked in. The space operatic exploration of the Next Gen's diverse characters was a truly modernized update to the original series with better production, special effects and in my humble opinion – consistently better writing overall. Having not watched the series since its 90s TV run it will be interesting to see how it holds up over time.

Check out the Next Generation HD Trailer:

Read the Complete Thread
Wayde Robson posts on February 02, 2012 14:43
I had a chance to watch Inner Light, one of my favourite episodes of NG, it’s the one where Picard lives a whole life on another planet.

I started noticing thick noise or graininess in some of the deep colors, like the back of Picard’s red jacket. I saw the same sheen of grain anytime there was adverse lighting such as the over-bright conditions outside in the sun or darkened shadowy areas. I was a bit disappointed thinking they’d clean up better. But overall, when lighting was good (which is 85-percent of the time) the picture quality was impressive. Skin tones looked amazing and detail popped.

Outer space scenes were particularly remarkable and the USS Enterprise from outside looks very clean and polished as you can imagine a Federation starship to be. Maybe a bit too clean however, evidence that you’re looking at a plastic model. But that’s a minor nit to pick.

Overall I found it impressive. I was happy that they maintained the show’s original 4:3 aspect ratio and didn’t attempt to widen the shots. It would have looked cheesy if they stretched it out or artificially added anything.

If you’re waiting for the show on Blu-ray to come out season-by-season based on the sampler episode I saw it will look good … but I think they could have done a little better job considering the price each season is going to fetch, the dedicated fans and the amount of work they put into the space scenes and recreating the special effects.
its phillip posts on January 31, 2012 16:58

I haven't seen any pricing info…msrp for the original series is $130/season ($71 on amazon) and $322 for all three seasons ($183 amazon). Hopefully TNG will be less (but I doubt it). If they do the same pricing structure the complete set msrp will probably be ~$750.

and when will they ever get to ST Voyager on BD!?
its phillip posts on January 31, 2012 14:07
I don't think I'm going to pick up the sampler. I've already seen comparison screenshots and all that stuff, and they look great. I'm definitely going to buy the series on blu of course
Wayde Robson posts on January 31, 2012 13:57
This was just released today, it's in stores and pretty cheap. I just picked it up, looking forward to seeing how it looks.
Post Reply