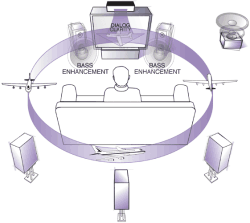 JFN Network, which is a contraction for Japan FM Network, is an association of member radio stations with 38 member stations throughout Japan, including the immensely popular TOKYO FM in the heart of Tokyo; a station that has already standardized on SRS Circle Surround as their surround broadcasting format of choice. Millions of listeners equipped with multichannel receivers that include a surround sound decoder already enjoy the benefits of surround music broadcast by TOKYO FM and other stations in Asia, and were treated to the extraordinary experience of a surround sound sports broadcast that put them right in the middle of the action. The soccer game broadcast reached millions of listeners throughout Japan and was encoded from 5.1 channels of surround sound down to two stereo channels for broadcast over the standard two-channel FM broadcasting infrastructure. Listeners receiving the broadcast through their multichannel home theater or automotive systems heard the full 5.1-channel surround experience as the encoded stereo signal was decoded back into full-bandwidth multichannel surround sound by the matrix decoder in their receiver. The best results are achieved from listening with a Circle Surround II decoder, which can be found in a wide variety of home theater products from Kenwood, Marantz, Accuphase and Theta Digital among others including M-Audio's USB adaptor/PCI Sound Card.

"We are delighted that so many listeners were able to hear their favorite sport broadcast in Circle Surround," said Hank Kato, sales manager for SRS Labs in Japan. "As Circle Surround and next-generation Circle Surround II decoders continue to become a 'must-have' feature in both home theater systems and automotive products, radio stations are quick to realize the benefits of offering state-of-the-art surround sound broadcasts to consumers. Also, radio stations that can deliver content in surround sound can also broadcast advertising messages in full 5.1 surround, which translates to 5.1 more reasons for advertisers to do business with that particular station."

Circle Surround, now strategically partnered with top broadcasters such as ESPN, HD Radio, Guangdong Radio and TOKYO FM in key markets of North America, China and Japan, is the ideal solution for radio broadcasters who currently transmit over a stereo or two-channel infrastructure but would like to offer surround sound to their listeners. The Circle Surround encoding system accepts any multichannel source, encodes it to a two-channel output, which can then be transmitted over any existing stereo broadcasting infrastructure. The CS-encoded two-channel signal can be decoded into a full surround sound experience with any A/V receiver. One of the most powerful features of CS encoding is that it is 100 percent backward compatible with mono, stereo and other multichannel decoders and even enhances the quality of stereo playback. This flexibility means that that any radio station can broadcast one signal that satisfies all possible playback environments of their listening audience from an old portable radio to the latest home theater system.

Circle Surround encoding has made inroads to many of Hollywood's most influential creative talent and professional broadcasters. Top broadcasters in the U.S. and abroad, including HD Radio, which is the standard for digital radio broadcasting in the U.S., and major television broadcasters who have adopted Circle Surround technology include ABC, CBS, NBC, ESPN, ESPN 2, ESPN HD, FOX, FX, TNT, PBS and over two dozen programs including the 55th Annual Prime Time Emmy Awards, X Games, NFL and NBA broadcasts. Circle Surround format is also making inroads with major music concerns including Lava records, a major label, and Coming Home Studios, a full service television and DVD production and distribution company that creates and distributes live concert DVDs. Coming Home Studios has worked with a who's who of platinum artists, including Matchbox Twenty, Rush, Dave Matthews Band, Duran Duran, Usher, Godsmack, Boz Scaggs, Marilyn Manson, The Go-Gos, Etta James and many more. Globally, Circle Surround encoding has been chosen as the surround broadcasting format of choice for TOKYO FM in Japan and Guangdong Radio in China. The CS format is the optimum surround solution for television because it enables any network currently telecasting in stereo to now deliver up to 6.1 surround sound to its listeners or viewers with no change to the distribution or broadcast infrastructure.

To date, Circle Surround decoding has been incorporated by leading hardware and software manufacturers including: Kenwood, Marantz, Motorola, Theta Digital, Accuphase, M-Audio, Orion Studios and Smart Devices. A wide range of analog and digital implementation options for CS and CS II are available from the SRS Labs' family of platform partners including AKM, Analog Devices, ASP Microelectronics, Cirrus Logic, Philips Semiconductor, STMicroelectronics and Texas Instruments. CS II features patented post-processing techniques to enhance the surround sound experience, including SRS Dialog Clarity(TM), which improves the intelligibility and clarity of center channel information such as dialog, and SRS TruBass®, which uses patented psychoacoustic techniques to deliver deep, rich bass from any playback system, including those with or without a subwoofer.

About SRS Labs Inc.
SRS Labs is a recognized leader in the advancement of audio and voice technology. The company works with the world's top manufacturers to provide a richer entertainment experience through patented sound techniques. SRS Labs' technologies can be heard through products ranging from televisions, flat panel displays, DVD players, mobile phones, car audio systems, headphones and notebook and desktop computers. The company also offers hardware and software tools to professionals and consumers for the creation, production and broadcast of content featuring SRS Labs' technologies. SRS Labs' wholly owned subsidiary, ValenceTech, is a Hong Kong-based semiconductor company that designs and sells custom ASICs and standard ICs to leading manufacturers worldwide. Based in Santa Ana, Calif., the company also has licensing representation in Hong Kong, Japan, Europe, and Korea. For more information about SRS Labs, Inc. please visit www.srslabs.com . The information on the aforementioned website is not incorporated by reference into this press release.

Except for historical information contained in this release, statements in this release, including those by Mr. Kato in paragraph three, are forward-looking statements and projections (which include statements concerning plans and objectives of management for future operations) that are based on management's belief, as well as assumptions made by, and information currently available to, management. While the Company believes that its expectations are based upon reasonable assumptions, there can be no assurances that the Company's goals and strategy will be realized. Numerous factors, including risks and uncertainties, may affect the Company's actual results and may cause results to differ materially from those expressed in forward-looking statements made by or on behalf of the Company. Some of these factors include the acceptance of new SRS Labs' products and technologies, the impact of competitive products and pricing, the timely development and release of technologies by the Company, general business and economic conditions, especially in Asia, and other factors detailed in the Company's Form 10-K and other periodic reports filed with the SEC. SRS Labs specifically disclaims any obligation to update or revise any forward-looking statement whether as a result of new information, future developments or otherwise.