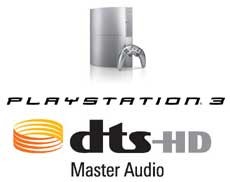 The PS3 Now has dts-HD

Sony today announced that the next system software update for the PS3 system, slated for release next week, will add DTS-HD Master Audio and DTS-HD High Resolution Audio support, enabling consumers to enjoy Blu-ray movies with studio-quality, high-definition audio. In addition to the new audio capabilities, the free system software update (v. 2.30) will allow PS3 owners to access the revamped Playstation Store, as previously announced. As part of the revamp, the new store will transition from an integrated online storefront to an application living natively on the PS3, enabling customers to more easily and quickly locate and purchase games, and download demos, game videos, Blu-ray movie trailers and other game-related content for PS3.

DTS-HD Master Audio has the capacity to deliver audio at a variable rate of 24.5 Mbps (megabits per second) on Blu-ray disc, a rate significantly higher than standard DVDs. DTS-HD Master Audio also offers 7.1 audio channels at 96kHz/24-bit. Currently, more than 100 Blu-ray movies and concert videos feature DTS-HD Master Audio soundtracks - so this is a huge announcement for Sony.

There is something to be said for the nearly future-proof PS3 as it continues to evolve as a gaming and home entertainment system. SO far it has really kept up with the newest technology innovations without requiring further investment from consumers. Try that on your first or even second generation Blu-ray players... For additional details and instructions on how to update the PS3 system software, please visit http://www.us.playstation.com.

“I'm having the same exact issue. In fact, it's an issue with all New Line Cinema titles when played on the PS3. The PS3 shows DTS-HD MA and the Receiver (mine's an ONKYO 805) shows 5.1 PCM. But if you'll notice when the opening screen for the films comes up (The New Line Home Entertainment Animation) that is in 7.1. This is the explanation I found on AVS forum.

”It's not a New Line Issue…


This is a Sony issue… they haven't properly implimented the decoder…

I have spoken to DTS and New Line about why this happens on certain pieces of hardware.

The NL titles use the later for logos, and the former for features.


The decoder should simply pass the side or rear surrounds out the same outputs, regardless of where they are physically placed.. this is certainly a decoder issue, and should've been caught during QC.. it might've been, and should be easily correctable.“

That's what I was told. The guy showed some diagrams from New Line to illustrate the problem, but you get what he's saying. This is a PS3 issue that Sony will have to fix. I just can't believe they didn't catch this earlier. We've been asking for this update for a long time and when we finally get it. It doesn't work right. BTW Star Gate uses 6.1 DTS HD HR and that worked perfectly so it has to be a decoder issue for New Line's 7.1 configuration.”

Are you sure you have 7.1 LPCM enabled under all of your audio settings? You may want to check that.
Post Reply