Separation of Church and Games? 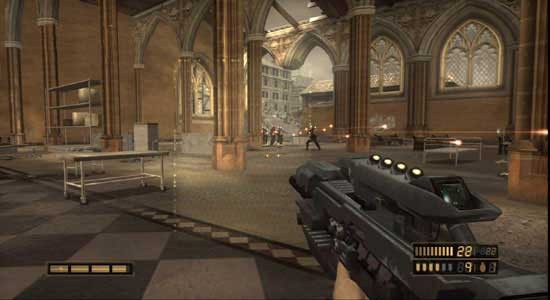 Not since the Opie and Anthony debacle has the church been so up in arms over an apparent desecration of it's buildings. The Church of England asked Sony to apologize and withdraw Resistance: Fall of Man, for its graphic gunplay sequences which take place in a British cathedral. I believe the term utilized was "virtual desecration."

Taking it a step further, the Anglican Church pushed to have Sony contribute financially to help curb gun violence in Manchester by giving to the Cathedral.

"The video footage of the cathedral battle on YouTube has shocked and dismayed us beyond words. They can only be described as virtual desecration," Rogers Govender, Dean of Manchester Cathedral, told reporters. "We are shocked to see a place of worship, prayer, learning and heritage being presented to the youth of today as a location where guns can be fired," he added.

I normally don't advocate much censorship, however a bit of decorum could have been used in creating an environment that so closely mimics a real cathedral in existence today. With so much gun crime apparent in Manchester this doesn't exactly help a situation that the Anglican officials are hoping to impact for good.

According to Govender, it was well known that Manchester had a serious problem with gun crime. He noted that three youths had been shot in the past 72 hours alone.

Taken at face value, what Sony has done is put a near-photorealistic environment and laid it into a game where users are encouraged to have an all-out gun battle, complete with gore and blood spatter. Whether Sony will withdraw the game (highly doubtful) or contribute to reducing gun crime in the area (less doubtful) remains to be seen. In the absence of additional corporate ruling and legislative prohibitions, it would, however, be nice to see some adequate self-regulation in this areas to avoid any future issues that might result in overreaction and negative publicity for the gaming industry.

I'd word it like … "We are sorry for reproducing the cathedral so realistically in 720p, and for creating monsters in the cathedral you can send to hell with your rifle …"

I'd word it like … “We are sorry for reproducing the cathedral so realistically in 1080p, and for creating monsters in the cathedral you can send to hell with your rifle …”
avaserfi posts on July 07, 2007 13:26
It seems this has finally been ended with the church getting an “heartfet” apology in the local paper.

http://www.tgdaily.com/content/view/32798/98/
krzywica posts on June 18, 2007 14:57
A scene comes to mind from the movie “Kingdom of Heaven”. “God wills it!!!” just before going off to battle and killing a bunch of people for no reason whatsoever. Haha. How ironic.
avaserfi posts on June 18, 2007 00:29
Not too surprising. It seemed from the start that the church was after a big corporation and their money. Thats how this will end.
Post Reply