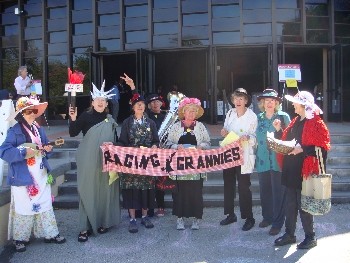 A Federal Communications Commission (FCC) hearing unfolded at Stanford University this week. The affair became a flashpoint for the diverse gathering to express concerns for the first amendment guarantee of free speech in the digital age. One of the most colorful was the Raging Grannies for Net Neutrality.

The gathering at Stanford was the second public hearing held by the FCC to examine the issue of net neutrality. A parade of speakers voiced grievances over the big Internet providers trying to control access to content. One of the key issues was a complaint that Comcast was blocking the use of peer-to-peer (P2P) file sharing programs.

P2P file sharing programs like Kazaa and Gnutella are infamous for being used to trade in intellectual property, notably music, TV shows and movies. Comcast has been blamed for slowing down or even outright blocking Internet connections when using P2P or bit-torrents.

Perhaps it’s the result of your Internet connection being controlled by a content provider. The cable company stands to lose when you download content you should be buying from them. It’s the FCC’s unenviable job to regulate this confusing mass of cross connecting interests in communications.

The argument against FCC enforcement is that the market is self-regulating. One of the FCC commissioners, Deborah Taylor Tate said that Comcast and other networks are taking positive steps on their own.

“Technology and the marketplace seem to be responding to appropriate oversight mechanisms” Said Tate.

Another of the 300 attendees at the hearing, Stanford Law School professor and founder of the Center for Internet and Society Larry Lessig said:

The debate over net neutrality has trickled in over the last decade. Years ago the ultimate net neutrality nightmare scenario seemed a little far fetched. The vision involved Internet access being controlled by corporate communications masters. The gatekeepers would only provide premium access only sites that further their corporate goals and objectives and either deny or slow down access to the rest of the web. Hence they would create a two-tier Internet of haves and have-nots. Essentially the Internet becomes a series of independent mini-AOL-like networks.

Network providers like Comcast and AT&T have argued they have no interest in contributing to a multi-tier Internet. Their argument is that market forces would correct the mistakes the of Internet providers who overstepped the Internet’s inherent neutrality. Competition should weed out net neutrality abusers because Comcast customers are free to switch to another provider.

Critics of the current state of Internet regulation are quick to point to recent incidents that have raised the net neutrality alarm.

Notably Eddie Vedder’s words were censored during a Pearl Jam concert last summer that was web-cast by AT&T. Anyone with AT&T’s Internet connection had Vedder’s between song tirade of anti-Bush statements blanked out.

The possible need for net neutrality enforcement has reared its head again since Comcast was cited as having an ongoing campaign to block file sharing among its customers.

Whatever comes of these FCC hearings on net neutrality we’ll be in support of keeping your access to the best professional reviews on the web fast as possible. It would truly be a crime if your access to Audioholics.com was ever interrupted.

Read the Complete Thread
Wayde Robson posts on April 23, 2008 11:53
Thank you for your comment on Audioholics and for your participation with the process with the FCC. You are truly the preturbed ladies of free speech!
webgranny posts on April 20, 2008 19:26
thank you for acknowledging the Raging Grannies' contribution to the FCC hearing. You should know that the two Democrats on the Commission thanked us warmly for our appearance. Not only did we sing/chant outside the hearing, two of the Grannies testified during the public comments period.
More at our blog. RagingGrannies.com
Thanks, Audioholics team!
Granny Ruth Robertson
mtrycrafts posts on April 18, 2008 14:32
Thanks. Yes, it would be a disservice to block or even slow down access to AH. AA, now that is another matter altogether; I am all for that
Post Reply