Printable Speakers? They Are Coming 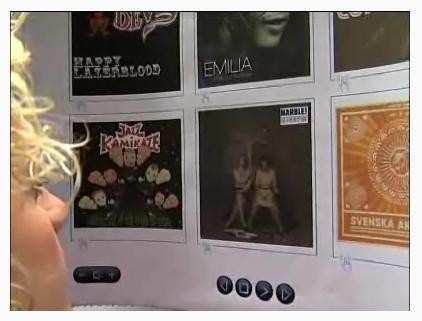 OLED technology promised the possibility of printable display, but wouldn't it be equally cool to one day produce printable speakers? Sure, this would never replace your high-fidelity home theater system, but think of the commercial possibilities and opportunities for advanced functionality of magazines and retail displays. Well these large boards and store displays already exist as prototypes. Thanks to research teams at the Mid Sweden University, these smart boards can communicate directly to customers via embedded electronics on the paper itself. You simply touch various parts of the display to get information to stream out of printed speakers. The possibilities are virtually endless with tourist attractions, commercial applications and theme parks leading the imaginative path.

Research teams at the Mid Sweden University forestry industry research program Fiber Science and Communication Network (FSCN) are already working on the fourth generation of paper products (benignly called 'Paper Four') that can communicate with computers. The idea is to reconnect paper with the computer world for cross-media compatibility and interaction. It's a noble and lofty goal but whose necessity can be seen by the lack of digital eBook adoption over the years.

"We combine paper with printed graphic codes and electronically conductive ink that is engineered to be sensitive to pressure. Then digital information is embedded in the paper, and when it is touched, the information comes out via printed speakers," says Mikael Gulliksson, project leader for media technology in the comprehensive research project. A large display board is already in use (a video demo is available on their website) to show how the marketing of new travel destination, for instance, can be carried out by having the recipient enter the advertising world. When the person touches a picture or text, he or she hears the audiovisual advertising message. Instead of a flat advertising surface, this advertising invites people to enter into and interact with the message. Applications could be for advertising campaigns, marketing, and events. Other possible areas are product displays in stores.

The same technology has been used in a prototype for a 'music display board.' On this slightly bowed board, a number of music albums are printed directly on paper. Just as with a regular sound system, you can sample music by touching the front of the album. The sound is then streamed right out of the paper. The board can easily be replaced as soon as there are new recordings to be marketed. This new display technology is inexpensive, combining images, sound, and space in a new an environmentally friendly way. After use, the displays can be tossed into the recycle bin!

The three research teams in the project include scientists from materials physics, media and communication science, and electronics. Paper Four is a research project that collaborates with the paper industry in the mid-Sweden region. The aim is to develop an entirely new paper-based product platform for marketing products and services.

Inexpensive... easy to manufacture... good for the environment... groundbreaking new technology... where do I sign up!