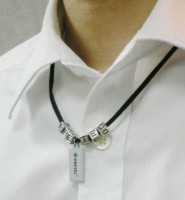 TAIPEI, Taiwan - May 30, 2005 - Pretec Electronics Corp., the inventor of i-Disk Tiny, the smallest USB flash Drive in the world since 2003, is demonstrating USB Flash Drive Fashion Accessories based on patented CU-Flash technology, at Computex 2005 (Hall 4, T202B) in Taipei.

With a volume of 0.63cm (27mmx12mmx1.9mm), 40% smaller than a US Quarter coin, and only 1/3rd of the size of bare i-Disk Tiny (volume of 1.88cm) which has been hailed by TIME Magazine (Nov. 2003) as "Best Gear of 2003"; CU-Flash is about 1/10 of the size of a typical USB flash drive. Examples of USB Flash Drive Fashion Accessories such PRETEC ear-rings based on CU-Flash technology will be worn by PRETEC staff in the show; so small that most people will have a hard time to believe that around 10,000 pictures (1GB) can be fashioned to one's ear lobe. With a sleek patented design and stylish outlook, CU-Flash can be an ideal add-on for any stationery such as pen, jewelry or personal accessories such as watch, necktie pin, cuff link, money-clip and more. PRETEC will demonstrate many fashionable accessories and novel USB flash drives based on CU-Flash/i-Disk Tiny in Computex 2005, including i-Duck, Sushi Disk, Food Disk, Ghost Radar, ear-rings, key chain, belts, necklaces, necktie pin and etc. 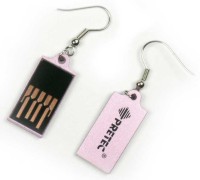 About Pretec
Pretec(TM) Electronics Corp. ( http://www.pretec.com ) offers a complete spectrum of small form factor memory cards and card readers such as ATA/CF card, IDE & Mini-IDE Flash Drive (MIDE(TM)), MMC, and SD Card for the digital imaging, mobile computing, and Military/Industrial Control markets; and is the creator of Innovative CompactI/O(TM) cards for PDA, digital cameras and many IA devices. Pretec has consistently demonstrated the highest capacity CF cards in the world; such as 80MB, 128MB, 160MB, 320MB, 640MB, 1.5GB, 2GB, 3GB, 6GB and 12GB CF card at various locations around the world for the past six years.