Polaroid Ends Production of Instant Film - End of an Era 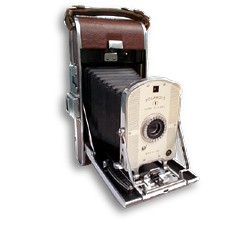 After polarized film was first patented back in 1929, the Polaroid company opened its doors just a scant 8 years later. 11 years later, the first instant cameras hit the market in full force and continued in one form or another... until just last year. Now, Polaroid Corporation (a reformed version of the earlier company) announced to consumers and corporations everywhere that, due to marketplace conditions, it has discontinued almost all of its instant analogue hardware products.

But more than that, Polaroid has also made the decision to cease manufacturing of instant film products in 2008. This has been a long time coming - and collectors everywhere should rejoice, but it marks the end of an era. As far back as I can remember, there was always one family member or another who capitalized on Polaroid cameras. They showed up at weddings, reunions and other events where instant pictures were a staple.

Polaroid had an interesting history, with inventor and founder Edwin H. Land focusing his work on polarization and products making best use of that scientific principle. He was a student at Harvard University but left after his Freshman year and headed to New York City to work on his inventions. After inventing a new way to create polarizing film he first applied the technology to sunglasses and camera lenses.

In 1947, Land demonstrated the world's first instant camera and film. A couple years later it was commercialized and sold all over the country.

The original Model 95 Polaroid resembled a large cigar case until it was opened and expanded, revealing the camera's innards. This model lasted for almost 5 years as the sole product of the company until they introduced additional models starting in 1952. The final Polaroid product was the i-Zone 200 Mini Instant Camera which resembles a child's pocket camera, but one that accepts 12-frame instant photo packs.

The technology that put the final nail in the Polaroid coffin was the rapidly dropping price of dye-sublimation printers. These easy-to-use products created waterproof, permanent-quality photos instantly from today's digital cameras. Once these dropped under $100 the Polaroid market was doomed. Featuring faster finalization times (print speed vs development time for instant film), better color, and less expensive consumables, dye-sublimation remains the leader in instant photo reproduction.

Think Edwin Land and Polaroid have nothing to do with home theater technology or modern day AV electronics? Much of Dr. Land's research contributed to polarization techniques to control light  - a necessary component of LCDs. It's the end of an era, but one we can all appreciate.