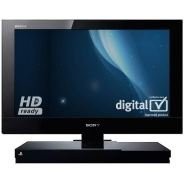 Sony has unveiled a new Bravia television model called the KDL-22PX300 which features a built-in PlayStation 2 game console. Well, not so much "built-in" as "we set it on top of a PS2". The base of the TV is a bulky rectangle, similar to a ZVOX base, which houses the PS2/DVD player. While the PS2 isn't exactly the newest gaming system on the block, it's still one of the most popular systems to play - in terms of actual gameplay and titles. The 720p Bravia KDL-22PX300 LCD TV costs just over $300 and comes with 4 HDMI inputs, a Freeview digital TV tuner and of course the PlayStation 2 console with one game controller included.

Just the thought of a 22-inch TV that can play back DVDs might be attractive to some college students and those with smaller apartments and homes. But add to that the massive catalog of still-shipping PS2 games, and you have a truly compelling product - even if it is a bit retro in design (I mean, can't we get a PS2 onto a chip these days?) The KDL-22PX300 also has an Ethernet port for internet, three USB sockets, VGA and SCART analog video inputs. In that sense, it's ready to go for gaming, TV and movies.

The big attraction for most to the PS2 platform is the huge catalogue of games - nearly all of which are still available at cheap prices, especially compared to the current $60-a-pop products available for the PS3 and Xbox 360. The older-style games will also that will great on a smaller 22-inch display.

Do I smell a really cool Christmas present? I think I do.

Read the Complete Thread
its phillip posts on December 06, 2010 15:12
I still buy ps2 games, and have a ton that I haven't gotten around to playing. I really wish they would put the hardware back in the ps3 because I'd love to get a new slim to replace my og 60GB.
j_garcia posts on December 06, 2010 15:02
I'm not sure I see there being a big market for it. Yes there are a ton of games for the PS2, but there are fewer and fewer big new releases on it. They are sort of shooting themselves in the foot with it. PS2 sales are still pretty good, but to introduce a new product based on it seems strange.

I thought that too, and I still have my (dead) 60G, but the reality is, I haven't played a PS2 game in a LOOOOOONG time, so backwards compatibility really isn't that big of a deal anymore IMO, and Sony recognizes this. If they integrated the PS2 chip back in, then they would also charge $100 more for the PS3 retail and way more people would complain about that.
smurphy522 posts on December 06, 2010 13:41
I guess there is a big market for this. I personally wish they would have put the chip in a new PS3 (just like to orig. 60 & 80 gb models had).

Better use of the same PS2 chip IMO.
Post Reply