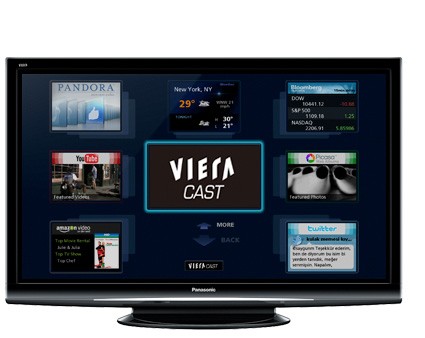 Panasonic announced the activation of Twitter on Panasonic VIERA CAST enabled HDTVs.  Twitter will also be available on VIERA CAST-enabled Blu-ray Disc Players at a later date.  The planned addition of Twitter, a real-time global information network, was announced in January at the International Consumer Electronics Show.

Twitter is an information network that enables its users to send and read other user messages called Tweets -- text-based posts of up to 140 characters. Twitter has achieved enormous growth since its founding in 2006. Proof of that is evidenced by the fact that there are 70 million Tweets written per day by more than 145 million users worldwide.

For 2010 VIERA CAST-enabled HDTVs, Panasonic also introduced USB connectivity which enables the addition of a wireless LAN adaptor (802.11b or faster), a keyboard for more efficient site navigation and communication, and USB memory which supports AVCHD video and JPEG photos.  VIERA CAST requires no external box or PC2 and is accessed via a single button on the television remote control. There is no fee to use the VIERA CAST functionality (some VIERA CAST services such as VOD have a separate fee structure).

"Since we introduced Panasonic VIERA CASTTM IPTVs three years ago we have added more and more of the top entertainment and social networking sites in the world," said Merwan Mereby, Panasonic’s Vice President, Corporate Development. "The addition of Twitter to VIERA CAST further strengthens the interactive options Panasonic VIERA HDTV owners can now use to communicate with family and friends worldwide.   Consumers with VIERA CAST-enabled HDTVS can now tweet on Twitter, video chat via Skype, share videos on YouTube and digital photos via Google Picasa right from the comfort of their living rooms."

About Panasonic Consumer Electronics Company
Based in Secaucus, N.J., Panasonic Consumer Electronics Company (PCEC), a market and technology leader in High Definition television, is a Division of Panasonic Corporation of North America, the principal North American subsidiary of Panasonic Corporation (NYSE: PC) and the hub of Panasonic's U.S. marketing, sales, service and R&D operations.  Panasonic is pledged to practice prudent, sustainable use of the earth's natural resources and protect our environment through the company’s Eco Ideas programs.  Information about Panasonic products is available at www.panasonic.com. Additional company information for journalists is available at www.panasonic.com/pressroom.

Read the Complete Thread
cwall99 posts on August 20, 2010 13:53
Who cares about Twitter? I'll get excited when they get off their duffs and get NetFlix running over VieraCast. When I asked Panasonic at the beginning of July, they told me mid-August.