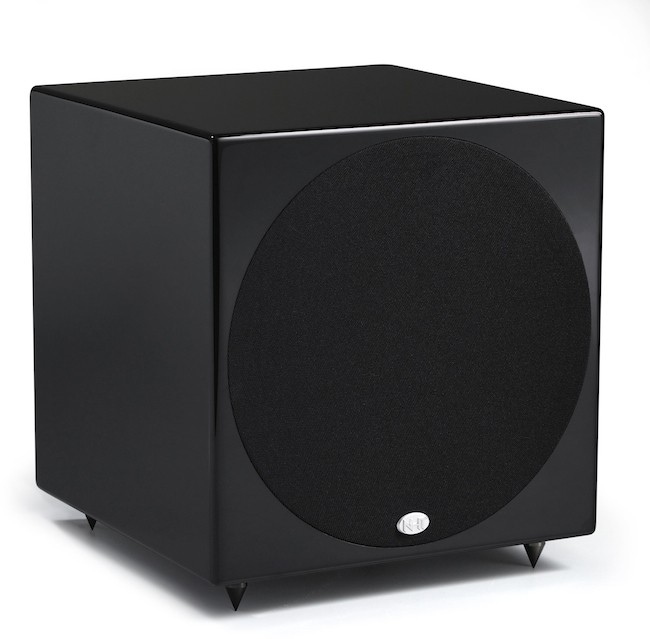 NHT is preparing to ship two new compact, high power subwoofers that complete the brand's shift to acoustic suspension design exclusively.  The amplifiers feature a new Class D, Bash design that employ on board DSP. Beginning next week the new B-10d and B-12d will be available at suggested retail prices of $499 and $699, respectively, via NHT's web site as well as select online and brick & mortar dealers.

Both the new NHT B-10d and B-12d seamlessly integrate with music and home theater systems, with improved dynamics and low-end response that remains consistently musical. Boasting compact footprints of 12.5" and 14" respectively, the new subwoofers feature a sensible set of controls and an I/O complement that fits both 2-channel and home theater applications.

The B-10d and B-12d amplifiers are a hybrid, Class D design with a new digital signal processor (DSP) engine that controls all equalization, low pass and high pass filter functions, compressor and limiter that helps them play lower and louder without losing the tight, controlled bass response associated with the brand’s most popular subwoofers. Unique to both models is a Dynamic Range Control (DRC) feature that dynamically controls the amplifier current at all impedances, for maximum output at all frequencies.

"2010 is shaping up as a major resurgence for the brand. Our steady stream of new product introductions is taking a major step down, but only in terms of bass response. Both of our new subs epitomize the best of our design capabilities by presenting true high-performance low frequency output that is true to our roots as a company that is run by music fanatics who are committed to serving up products for end-users who, like us, demand only the most musical, sonically accurate equipment, but without a ridiculously high price tag."

Amplifiers can run hot and waste energy, but not in the case of NHT's new subwoofers. With amps respectively pumping out 350 and 500 for the B-10d and B-12d, efficiency runs up to 80%, making these models powerful and green. The low frequency cut off is 32Hz for the B-10d and 28Hz for the B-12d.

NHT made sure these subwoofers will adapt well to nearly any two-channel or surround system. The B-10d offers both Hi and Low level inputs and Hi level outputs plus an LFE in that bypasses the built in crossover. The B12d loses the hi level in and out, but adds an LFE out for daisy-chaining multiple subwoofers and NHT’s proprietary Boundary Control that allows users to "move" the subwoofer to where it sounds best without having to physically move the actual unit. An automatic power mode acts as a trigger whenever the system is powered up.

The B-10d and B-12d feature NHT’s popular high gloss black finish, and four tips for vibration-free performance without puncturing holes in the floor.

Apparently, NHT is just getting started and has indicated that it still has more new products to roll out before the end of the year.

About NHT
Since it was founded in 1986, NHT® (www.nhthifi.com) continually challenges the notion that the high-end means high-price. NHT takes pride in designing, manufacturing and marketing loudspeaker systems that provide a lifetime of listening pleasure. Its products from past to present speak volumes of NHT’s dedication to sonic excellence.


I applaud NHT's decision to get back to the acoustic suspension design principle. The acoustic suspension design principle is inherently superior from a musicality standpoint, because it avoids the introduction of a resonance ripple overlaying the sensitivity curve, and because it is inherently lower in distortion, owing to the fact that the centering force for the diaphragm remains more nearly linear over the range of motion of the driver.

The reasons why Kloss and his pals came up with the idea of acoustic suspension back in the late ‘50s were fully legitimate, and they remain as legitimate today as they were then. The shift in commercial speakers to ported enclosures and passive radiators in recent decades is a reflection only of the fact that for a speaker to be commercially successful, the quantity of bass matters a whole lot and the quality of bass matters hardly at all. When this trend first started back in the ’70s and early '80s, few people would dared to have suggested that there was anything truly superior about ported enclosures, from a musical or hifi standpoint. But because it has gained so much in popularity, most people nowadays assume that there is nothing inherently wrong with ported enclosures from the standpoint of accuracy and musicality, but this is wrong.

That said, not all sealed enclosures are true acoustic suspension designs. You can seal up the enclosure and avoid the Helmholtz resonator effect and the ripple, and that solves most of the problem. These new passive radiators probably do that, and on this basis alone, and assuming that the damping is adequate and the power is adequate, they are inherently superior to almost all other subwoofers of similar size. If I were presently in the market for a subwoofer, I would certainly take a good listen and pay attention to the extension into very low frequency and the avoidance of the “one note” bass effect.

Yet, unless the enclosure is very large, these subwoofers are not true acoustic suspension designs. To qualify as such, the centering force on the diaphragm has to derive from the pressure difference, not the stiffness of the suspension. Drivers that are true drivers for acoustic suspension designs use very supple suspensions. You can tell the difference when the driver is removed from the enclosure because the slightest push on the cone causes it to move. The difference is unmistakable, once the driver has been removed from the enclosure. You can put a driver with a stiff suspension in a sealed enclosure and get results that are superior to ported enclosures and passive radiators. And that is a good thing, and is probably what these new subwoofers do. But a true acoustic suspension design, that uses the pressure difference for the centering force and that is consequently lower in distortion because the centering force remains more nearly constant with displacement of the diaphragm, requires a comparatively large enclosure. In a smaller enclosure, the pressure difference at large excursion is great such that the advantage is lost. The centering force can vary more even than is typical with a driver having a stiff suspension, in which case it makes more sense to use a driver with a stiff suspension that provides a reasonably constant centering force over an adequate range of excursion, compensating for the loss in efficiency through an increase in power. You can do this, and get a result that is musically superior to what is possible with ported enclosures, but it still is not quite the same thing as a true acoustic suspension design, which uses a very floppy mechanical suspension, a comparatively lesser amount of magnetic flux, and a very large enclosure in order that the centering force will remain nearly constant with large cone excursion. These were the not-so-secret secrets to good high-fidelity speaker design forty years ago, and it has not changed. What has changed is that commercial speaker designers stopped caring about accuracy and high fidelity and started caring more about quantity of bass, which they were forced to do because when Joe Sixpack walks into the electronic megaplex to buy speakers, what he is looking for, to the exclusion of almost everything else, is the perceived quantity of bass.

Slee_Stack posts on October 29, 2010 09:58
Unfortunately, ‘Boundary Control’ is marketing speak for a parametric EQ set at a fixed frequency (41Hz) and fixed Q. At least that's what their product literature specs implies.

I am tempted to try out one of their subs seeing as they have a 100% money back guarantee including shipping costs both ways. That's a very good policy.
KEW posts on October 28, 2010 23:52
I guess a lot depends on the details of the built in EQ.

But then again, experience suggests caution about statements like:

NHT’s proprietary Boundary Control that allows users to “move” the subwoofer to where it sounds best without having to physically move the actual unit.

That is one heck of a trick if they can pull it off!
Slee_Stack posts on October 28, 2010 22:11
I'd have to agree with rnat above. Both need to be priced at least $100 lower to compete with the ID offerings. (Ordering direct from NHT will net a $100 NHT e-gift card..not too valuable, but better than nothing)

At the same time, they should be competitive with B&M offerings.
Post Reply