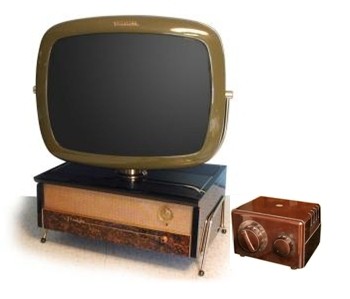 Don't forget to get yerself one of them new fangled converter boxes for yer fancy TV before it's too late.

The Congressionally mandated switch to digital broadcasting on February 19, 2009 may face another obstacle besides senior citizens who have no idea that their TV’s will go out and youngsters who don’t care about analog anything: Money. There's not enough of it to guarantee everyone a box.

According to Reuters, the National Telecommunications and Information Administration (NTIA), the branch of the Commerce Department overseeing the transition, reported to congress that more money might be needed to continue mailing out the $40 government subsidy coupons for digital to analog converters intended to ease the burden for consumer through the transition.

The program currently has a budget of $1.5 billion to subsidize 33.5 million converter box purchases.  The money problem, it seems, stems from the questionable decision to put an expiration date on the coupons limiting them to 90 days of usefulness.  Seems people have been requesting the coupons but not using them in the allotted time frame so now the government is going to have to mail out a whole lot of new coupons.

The NTIA began mailing the coupons on February 21st of this year and as of June 3rd, 16 million coupon requests have been requested but only 42% of them have been redeemed before the expiration date.  While the government gets the unused subsidy funds back into the program for reallocation, there is not enough in the budget for the additional stamps to do so.

Progress in the digital TV transition by the government has come under scrutiny for poor management before.  The Government Accountability Office (GAO) reported to Congress last November about the underwhelming level of planning and coordination by the FCC and the NTIA to develop a comprehensive formal plan to manage the transition with set goals, progress milestones, or contingencies for complications that will inevitably arise.  FCC Chairman Kevin Martin disagrees with the GAO planning assessment; he thinks all is rosy because it's all been mentioned in the FCC docket.  But FCC Commissioner Jonathan Adelstein echoed the GAO sentiment about the lack of coordination as well.  Other problems also exist at the private end as well.  Between retailers who sell televisions to consumers that are equally clueless about the transition to those who want to dump analog TV inventory before they have to eat it, there looks to be problems aplenty.

The NTIA currently claims that they are not asking congress for additional funds but they are awaiting a more complete cost forecast after July 1st as more data comes in.

Seems that the decision to set an arbitrary 90 day deadline to use the subsidy coupons once received was not such a good idea after all. Of course simply making an announcement that it is extending the coupon deadline date or making the coupons available online would be preposterous (yes, that was sarcasm). No, the federal government apparently feels it must continue on it's paper-based method of disseminating coupons via mail. Anything else would indicate the presence of some brain activity n Washington - and we're fairly convinced there is little of that.

Read the Complete Thread
GlocksRock posts on June 13, 2008 09:06
I thought it was ridiculous that they put an expiration date on the coupons, but that did kinda spur me on to get mine in a timely manner. Once I got my converter box, I was wishing I had gotten it sooner since the picture quality is much better, and I now have a programming guide, and a couple other features. The two things I wish it had but doesn't, are digital audio output(s) and video outputs that are better than composite video. But for the $10 I spend on the box, I can't really complain too much… I got the Zenith converter box at HH Gregg since it was $50 there vs. $60 everywhere else.

gliz, post: 422734
are you accusing our fine government of not thinking this all the way through, why that is unheard of

Well, Yeah, that exactly what I'm saying, and they're collaborating with a sinister movie industry scheme to totally abolish consumer recording of T.V. programs.
gliz posts on June 12, 2008 14:33
are you accusing our fine government of not thinking this all the way through, why that is unheard of
PhilCohen posts on June 12, 2008 10:26
In many respects, Digital T.V. is not yet ready for prime time. There's still no portable handheld digital T.V.'s to use in a storm emergency, and there's still no disc recorder or(widely marketed) videocassette recorder to enable consumers to make a permanent recording of a digital T.V. program. Worse yet,there's no laws in place to provide reasonable protection of consumer recording rights in the digital T.V. era. Even if digital T.V. disc or tape recorders are introduced, the elaborate copy protection system built into the ATSC standard means that even if digital T.V. tape or disc recorders are introduced, there's nothing to stop cable,satellite and terrestrial digital broadcasters from pushing a button and rendering 100% of the programming unrecordable.
Post Reply