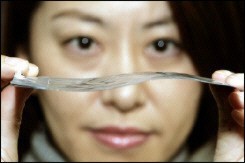 Tokyo, December 07, 2005 - NEC Corporation today announced that it has succeeded in the development of an ultra-thin, flexible, rechargeable battery capable of super-fast (30-second) charging, which can be embedded into smartcards and intelligent paper. The new battery, organic radical battery (ORB), uses a type of plastic called organic radical polymer (a type of plastic that has a stable radical in the molecular structure) as its cathode.

NEC first proposed the use of an organic radical compound as a battery's electrode active material in 2000. Charging occurs through the oxidation-reduction (redox) reaction of the radical region. The ORB exhibits an extraordinarily high discharge rate (large current discharged at one time). NEC was commissioned by the New Energy and Industrial Technology Development Organization (NEDO) during the period November 2002 to March 2005 to develop a battery for data backup on desktop PCs, which fully exploits the advantageous characteristics of ORBs. (Related press material: NEC Develops High-Power Organic Radical Battery for Data Backup during Power Failure, http://www.nec.co.jp/press/en/0508/0502.html

Organic radical polymer assumes an electrolyte-permeated gel state (the state in which polymer suffused with solvent expands), and is the reason why the rechargeable battery is so remarkably flexible and pliant. In addition, the organic radical polymer electrode reaction is extremely fast and the supporting salts migrate through gel state polymer very smoothly. This results in little resistance to the charging reaction and an incredibly fast charging time of less than 30 seconds. Not only is this new battery thin, flexible and rechargeable, but it is also environmentally friendly as unlike conventional rechargeable batteries, it does not contain any harmful heavy metals such as mercury, lead or cadmium.

Key features of the newly developed battery include:

NEC anticipates that its new and unique battery will be used extensively in the future to power all kinds of tiny ubiquitous terminals. The interconnection of networks with battery-powered next generation ubiquitous devices will enable all kinds of objects to become terminals, bringing us closer to a ubiquitous networked society by allowing access to the network anytime, anywhere.

NEC will continue to carry out aggressive R & D in this area toward enhanced performance and reliability of thin, flexible rechargeable ORBs. The results of this research will be exhibited at iEXPO 2005 being held at Tokyo Big Site, Japan, from December 7 - 9, 2005.

About NEC Corporation
NEC Corporation is one of the world's leading providers of Internet, broadband network and enterprise business solutions dedicated to meeting the specialized needs of its diverse and global base of customers. Ranked as one of the world's top patent-producing companies, NEC delivers tailored solutions in the key fields of computer, networking and electron devices, by integrating its technical strengths in IT and Networks, and by providing advanced semiconductor solutions through NEC Electronics Corporation. The NEC Group employs more than 140,000 people worldwide and had net sales of 4,855 billion yen (approx. $45.4 billion) in the fiscal year ended March 2005. For additional information, please visit the NEC home page at: http://www.nec.com .