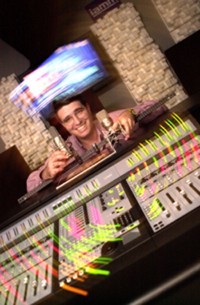 ARLINGTON, VA. - A new upgrade for home theater enthusiasts provides as many as eight listeners with the same surroundsound experience. The new system is one of the first to apply "fuzzy logic" to audio, assigning rules to sound wave data and providing a processor with instructions so that it can prioritize information.

Home theaters have always had a tricky quirk: in an averagesized room, the best sound would go to the listener in the middle, and everyone else had to settle for special effects that could sound far away or out of place. Now, following years of research into how humans perceive sound, audio engineers have infused a home-theater receiver with software that automatically detects room acoustics, speaker placement, and other information at eight unique locations and then processes the sound to give each listener the "sweet spot."

Called MultEQ and developed by Chris Kyriakakis and his colleagues at Audyssey Laboratories, Inc., the technology is a product of research into "immersive audio" by Kyriakakis and others at the Integrated Media Systems Center (IMSC) at the University of Southern California, one of the National Science Foundation's Engineering Research Centers.

MultEQ debuted last week in the flagship audio component of a major electronics manufacturer (see IMSC press release at http://imsc.usc.edu/news/releases/audyssey.html ). The new technology arises from findings in audio signal processing, acoustics, and psychoacoustics and is based on the NSF-supported doctoral research of Kyriakakis's one-time student, Sunil Bharitkar, and former IMSC Masters student Philip Hilmes. All three researchers are co-founders of Audyssey Labs and co- principal investigators on the research publications.

The MultEQ algorithm uses data from a microphone placed by the listener in any one of the listening locations. The home-theater receiver calibrates by playing a test tone through the main and surround speakers, a tone that is modified by each speaker's unique design characteristics and location - and further altered by the reflections of the sound bouncing off the walls of the room. The listener repeats the process for each location, such as three spots on a couch, two on a loveseat and one more on a recliner. Under normal playback, every the listening location receives a different spectrum of sound based on how the reflections and speaker factors interplay with each other. During calibration, MultEQ detects how each listening position is different and independently compensates for all of them, simultaneously modifying the sound to improve the experience for each person in the room.

Alternative approaches to provide multiple sweet spots have been developed by audio companies, but those algorithms average sound data, a process that can yield problems when sound waves cancel each other out. In addition, unlike traditional methods, MultEQ uses dynamic frequency allocation to assign more computing power to lower frequencies where problems with room acoustics can be more severe.

The researchers have recently adapted their process for car audio systems, a venue which has to compensate for far more obstacles such as window reflections and each listener's proximity to the various speakers.

Immersive Audio Demonstration
Moving beyond the elimination of room effects, Kyriakakis and his colleagues at IMSC are hoping to create environments where underserved communities can experience "live" music from a distance and musicians can rehearse in real-time with orchestras thousands of miles away.

Dubbed immersive audio, the technology combines highbandwidth Internet2 flexibility to distribute video and audio around the globe to 10.2 surround-sound systems - specialized theaters that envelop the audience with sound from twice as many speaker channels as one would hear in a conventional theater. The researchers will conduct their latest immersive-audio experiment at the University of Texas at Austin on Sept. 28. A highlight of the Fall 2004 Internet2 Member Meeting, the experiment is a demonstration of the realism of highdefinition video and high-fidelity, multi-channel audio ( http://arts.internet2.edu/fall2004-perfevent.html ). Using a survey developed by IMSC and University of Texas researchers, the team will ask a pair of audiences to take turns comparing a live performance and an immersive-audio presentation of selections by Beethoven, Tchaikovsky and Wolf performed by the Miró Quartet.

Comments from the researchers:

"The biggest breakthrough came when we discovered a way to create filters for each audio channel that optimize the frequency response over a wide listening area rather than just a single spot." - Chris Kyriakakis

"MultEQ has the potential to increase the interests of young people in science and engineering. The contrast between such a technology and what is already out there can peak interest in the science of human perception, physics, and engineering." - Mary Harper, Program Director for the Data, Inference and Understanding Cluster at NSF

"MultEQ is an exciting outcome of IMSC and a culmination of NSF's vision for providing support to this ERC for research that leads to innovative multimedia technology. IMSC brings high quality, interactive voice and video within the reach of all, turning your living room or office literally into the best seat in the house - - and you get to select the seat." -- Lynn Preston, Leader of the ERC Program

"Chris Kyriakakis and his cross-disciplinary team of researchers from IMSC worked for several years on their vision for this technology and brought it to the proof-ofconcept phase within the center. Establishing Audyssey Laboratories was the next phase in technology development and commercialization of this technology." - Lynn Preston

"The MultEQ system uses sophisticated new algorithms to produce a breakthrough in home audio, but similar algorithms can be applied to developing a hearing aid that allows its user to understand a friend at the far end of a noisy dinner table or allowing security to isolate a single conversation in a crowded train station." - Bruce Kramer