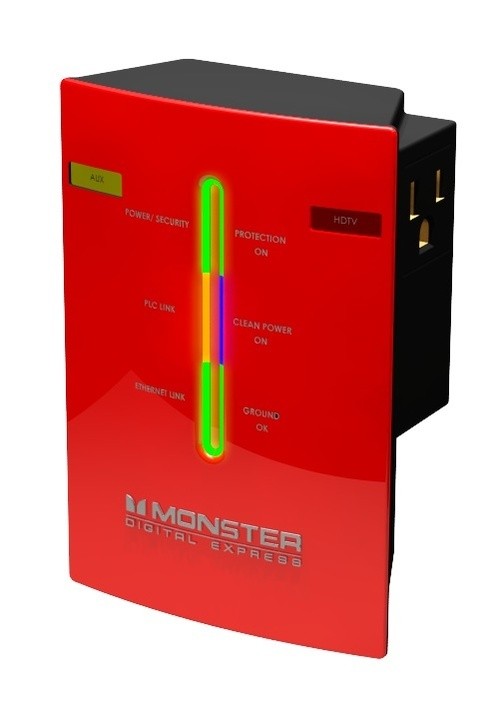 Does it make noise or remove noise? Both!

Monster is introducing a power line conditioning home theater plug that may actually make a little of its own digital noise as a power line networking device:

On the Monster PowerNet 1G, you can clearly see the Clean Power status indicator light on the device itself, as well as the various network status lights. Of course, the primary purpose of the device is to provide network communications over electrical wiring while ensuring that your sensitive home theater equipment is isolated via power line conditioning. What struck us as funny was the fact that a device like this actually makes its own digital noise, which it then has to filter away from your delicate analog gear. After so many years of Monster touting the importance of eliminating noise, and selling expensive gear to do just that, they finally came up with something that makes its own noise... and then eliminates that as well.

Aside from the noise issue, as a power line adapter for data networking, the Monster PowerNet 1G is claimed to be blazing fast. In a previous article I authored, we discussed alternative home networking solutions that included several power line standards. It will be interesting to see if Monster has managed to overcome the top theoretical data throughput speeds of 200 Mb/second, mentioned in the past.

Around the time I was working on the article, Belkin released the Powerline HD that was reported to hit theoretical 1 Gb/second speeds.  With this new device, Monster lays claim to achieving three times that speed at 3 Gb/second, making another huge jump in performance and besting even dedicated consumer level gigabit Ethernet.  While 10 gigabit Ethernet is available, the price for switches is still in the thousands of dollars or more range, making such a networking solution just a bit less than ready for consumer prime time. Besides, nothing currently requires that kind of data throughput in the home, with enterprise networking taking up those reigns until more data is brought into consumer set top boxes and sent around the home.

The issue with power line networking verses Ethernet is that it is extremely susceptible to power line noise, wiring quality, and signal path. Old/deteriorated wiring systems are bad, signal paths through multiple circuits and the fuse/breaker box is bad, and noise-generating appliances are bad.  While it is very common for Ethernet to get near-theoretical throughput speeds in actual use, it more common for power line systems to be a mere fraction of theoretical speeds, 20% to 50% is not uncommon, and that performance can vary considerably from connection to connection within a house.

At the performance levels claimed for the PowerNet 1G, even with crappy wiring, it may be possible to approach gigabit Ethernet performance without pulling a single CAT cable through a wall. Even 25% of theoretical throughput will still generate "goodput" of 750 Mb/second.  This data rate also trounces wireless N, which incidentally has its own set of troubles to reach anywhere near the theoretical peaks touted in advertising.

There is no official word on a release date and I could not find anything on the Monster website, but it appears that it will be priced at $300 - hopefully for a pair considering that the Belkin Powerline HD sells at $150 for a set.

If the PowerNet 1G performs its conflicting dual tasks as well as Monster claims it will be a force to be reckoned with... even if it does have to filter its own noise out of the signal. Remember, one man's noise is another man's music.