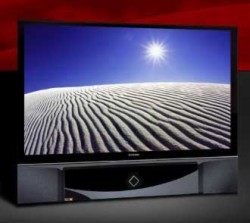 These new models have two HDMI inputs, three component video inputs and a nine-format memory card reader. All of these HDTVs are also Digital Cable Ready with CableCARD and have front panel IEEE 1394 inputs with DV decoder to allow easy playback from digital video camcorders.

Dark Detailer is a new Mitsubishi technology that provides enhanced contrast and black levels. It allows a wider palette of dark gray shades, giving a realistic sense of depth to the picture.

DeepField imager is a new system Mitsubishi developed that allows the television to display enhanced contrast and sharpness. It constantly monitors the picture signal and finely adjusts brightness, contrast and gamma so that every part of every frame is optimized. This results in a picture with greater depth-of-field, especially in scenes with both dark and light areas.

SharpEdge is the latest version of an exclusive Mitsubishi edge-definition system. New for this year, it enhances both horizontal and vertical edges for stunning picture precision. (Note: Audioholics recommends users turn this feature OFF.)

Discuss This Press Release in Our Forums