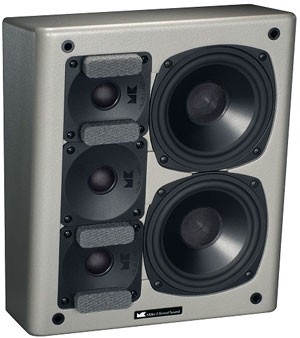 It seems the recently defunct Miller & Kreisel Sound Corporation (M&K) has a new lease on life after a group of Danish audio veterans invested in the brand according British AV news site AV Zombie:

M&K announced the cessation of business operations after 34 years in a notice posted on the company web site nearly a year ago on February 22, 2007.

As of Thursday, Feb 22, the M&K Factory is closed. For more information regarding Ken Kreisel's recent decision to close the M&K Chatsworth factory after 34 years, please email Ken Kreisel directly.

The Miller & Kreisel Sound Corporation was founded by Kreisel and partner by Jonas Miller whose association at Jonas Miller Sounds in retailing high-end audio in Beverly Hills ultimately led to the formation of the company.

Ken Kreisel has a long history of audio innovation, in both audio production as well as reproduction. Kriesel has been credited with developing the first subwoofer in the 1960s in response to customer complaints at Jonas Miller Sounds about the lack of bass output from electrostatic loudspeakers. The subwoofer made its first recording studio appearance during the mixing sessions for Steely Dan’s Pretzel Logic and it quickly came into vogue with movie theaters after the 1974 film Earthquake that made successful dramatic use of subwoofers in several theaters. Kreisel also is credited with the first modern satellite-subwoofer speaker design, which now forms the predominant basis for loudspeaker system design in home theater. M&K also owned subsidiary Real Time Records, which pioneered direct digital recording and was the first US record company to release a title on Compact Disc.

Stereophile interviewed Ken Kreisel shortly after the announcement became public where Kreisel confirmed filing Chapter 7 bankruptcy and cited some flagrant counterfeiting of M&K products that was rampant enough to lead to the demise of the company, which as recently as 2001 had doubled its production capacity. In particular, Kreisel mentioned the MP-150 speaker model in painted high-gloss black that was offered by counterfeiters but never produced by M&K:

We have recently discovered counterfeit product being sold internationally under the Miller & Kreisel Sound (M&K) name and trademark, probably manufactured in China, possibly shipped through the USA. This product may appear to be nearly identical to legitimate product, but its quality and performance in all likelihood does not meet M&K standards and has not been subject to M&K's legendary quality control process.

Some counterfeit product has been reported as totally non-functional with shorted inputs.

Beware of the MP-150 in the painted high-gloss finish. No legitimate MP-150s have been produced in this finish. M&K-built MP-150s have cabinets painted in the standard M&K textured matte finish used on the S-150.

If you suspect you have bought counterfeit product like this, we would like to hear from you. Please include Model and Serial Numbers, where and when it was bought, including country. Please email that info to Ken Kreisel.

According to AV Zombie, Chris Minto, former head of M&K’s Professional Division, will head up the revived brand. Minto states that he intends to maintain the historical quality of the brand and improve where possible, that M&K will keep on popular classic product lines and replace any lesser quality products with newly improved models. The new owners are said to have had a long association with the original M&K as well as a strong relationship with M&K’s primary driver manufacturer, Tymphany, who supplied the drivers for most of M&K’s products.

Good news for the M&K fans out there.

Good, I'm glad they finally got the old domain name working, www.mksound.com. It redirects you to the site they have been using since late last year, www.mksoundsystem.com. It'll be nice to see what they do and how they promote everything.

Jack Hammer, post: 372773
Since M&K went under, alot of their replacement speakers, crossovers, boxes and other stuff have been available cheap on eBay. You might be able to find the parts you need there. BTW, thats a nice sub.

I know what it needs, it's a very inexpensive part made by Sanyo (the IC output device). Unfortunately the protection on this dated subwoofer is inedequate and when it encounters low frequencies the woofers drop in impedance and this just blows the IC output device. By low frequencies I mean sub frequencies. Every other part of the amplifier seems fine, but the IC has blown on me 3 times now. I really want to fix it and sell it, maybe the next owner won't be a complete bass nut like me.

I, too hope they honor the warranty. I don't have high hopes though. It was a very small company. The people made the company, not the name.
Jack Hammer posts on February 09, 2008 13:56

Seth=L, post: 372761
I would hope so, I hope they don't produce their products in China or Taiwan.:o

Since M&K went under, alot of their replacement speakers, crossovers, boxes and other stuff have been available cheap on eBay. You might be able to find the parts you need there. BTW, thats a nice sub.