Mail the Force Be With You 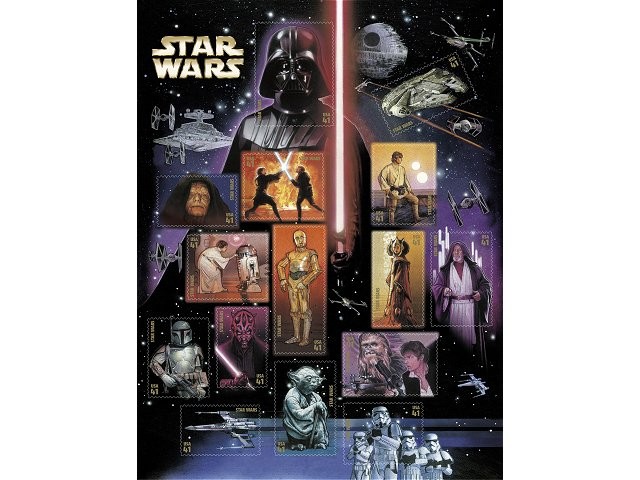 The US Postal Service is releasing a set of 15 commemorative Star Wars stamps in May of this year. People will then get to vote on their favorite stamp which will be reissued as a single stamp in late summer or early fall to correspond to when the rates are expected to be hiked to $0.41. I'm personally rooting for Anakin fighting Obi-wan or possibly Darth Maul - the obvious choice. If Amidala wins I'll go on a hunger strike - stamps should not be determined by 8 year olds.

Star Wars (as a stamp concept) had apparently come up previously according to an interview conducted by the AP when the Postal Service issued its 'Celebrate the Century' stamp series, however the idea was revived by the advisory committee for the 30th anniversary of Star Wars.

The 15 stamps will be issued on a single sheet that resembles a movie poster. Once the stamps are available, people can go to www.uspsjedimaster.com and vote for their favorite.

As an added bonus, beginning April 6th, there will also be available (for a limited time) Star Wars Express Mail pre-paid 3-packs. The factory sealed, Star Wars-branded packaging features portraits of young Obi-Wan Kenobi, Yoda, and Darth Vader. Customers can begin pre-ordering online on Friday, April 6 and the packaging will be available to ship on Sunday, May 6, through Saturday, September 1. It was not stated whether there will be a premium price for the packaging.

That’s got a low percentage.
j_garcia posts on April 10, 2007 18:16
Those are so damn funny. I saw one of those boxes just the other day in Palo Alto. *edit Looking at the map, there is actually one literally right up the street from me….will go take a pic soon. Too funny.

Oddly enough on a related note, my parents were going through their garage and found a box of my old Star Wars figures…
majorloser posts on April 10, 2007 18:08
R2D2 Mailboxes

As part of the Star Wars release with the Post Office, they are placing mailboxes that are made to look like R2D2 all over the USA.

Here's a map to help find one in your area:
http://www.frappr.com/r2d2

Tom Andry, post: 259261
I voted for Vader but it was a tough choice. I like the Leia/R2 image for the nostalgia and Darth Maul because he just rocked.

They are all great pictures. Very hard choices. But, I liked the 2 star picture, Luke just happened to be in it.
Post Reply