MagicJack Casts A Spell On Your Cell Phone 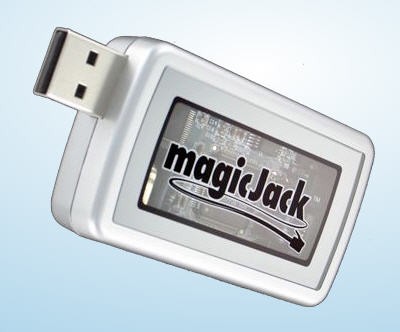 The wizards at YMAX Corporation, the company that created MagicJack, have a new trick up their sleeve – they want to turn it into Skype.

The way MagicJack works is simple: A USB device not much bigger than a thumb drive connects your PC and telephone, then presto, an instant VoIP connection. When people first started seeing the product on late-night infomercials they snapped it up in droves. The company says it’s sold in excess of 5-million units so far.

Unfortunately, YMAX’s sudden rise, spurred by the popularity of MagicJack, is a case of a company growing up too fast. It exploded into the phone business quickly, but its lack of support infrastructure has caused numerous complaints, according to PCMag.com:

“When it works, it's great; when it doesn't, you shouldn't expect much help from the company.”

As it continues to address negative press over support, YMAX is now expanding its device into new and contentious territory. At CES this year, the company announced that its new iteration will bring the MagicJack VoIP network to your cell phone. This involves a new MagicJack device that is effectively a low-cost femtocell – a device that creates a short-range cellular base-station for your household.

The new device will work much like the old MagicJack, but for GSM cell phones. Instead of connecting to your carrier’s network, your handset will connect wirelessly to the MagicJack. This will allow you to make local or long distance phone calls without using your minutes. Basically, it’s like Skype only instead of Wi-Fi you’re using your phone’s GSM capability.

The new device will work on the existing MagicJack network for the same $19.95 annual fee.  YMAX says its new device will cover up to a 3,000 square foot area in your home. According to Dan Borislow, the company’s CEO, the device is good on any GSM phone, including phones using AT&T and T-Mobile in the US and Rogers in Canada. YMAX has also announced its plan to release a version of its telephony technology for Wi-Fi so that it competes directly with Skype.

Many see the company’s new venture as risky, because cellular carriers pay billions of dollars in licensing fees to operate on the same wireless spectrum that MagicJack’s femtocell wants to use for free, without permission, licensing or even so much as an FCC agreement.

Wireless carriers have been experimenting with consumer-grade femtocells for some time as a solution to extend their wireless network into those hard-to-reach areas in the home. But the carriers’ devices haven’t been cheap, costing over $200 each. They do, however, carry all the necessary licensing and approval for (legal) use.

MagicJack And The FCC - Ignore and Proceed

FCC spokesman Bruce Romano said he couldn’t comment on the legality of MagicJack’s femtocell service, but he did say the device has not been submitted for FCC approval. The original MagicJack is approved, and Mr. Romano says it’s likely the FCC would also approve the new MagicJack because of its low-power capabilities.

YMAX says it doesn’t need permission to use the carriers’ operating frequencies in the home and that it’s protected under Part 15 of FCC regulation. This stipulation allows a device to operate without a license if it uses very low power, and doesn’t cause interference.

It seems clear that the FCC doesn’t want to start anything with YMAX over personal femtocells using unlicensed bandwidth. The organization’s main concern is interference, and MagicJack’s low-power networks for the home aren’t likely to make a western omelet out of your neighbors’ in-house wireless devices. But the wireless carriers, backed by the CTIA, probably see things differently.

In 2007, the CTIA requested the FCC regulate in-home wireless network signal boosters. The CTIA believes it should be illegal to boost any signal without the consent of the spectrum licensee. This contentious issue is still being debated, and YMAX is likely watching very closely for any signs of a decision. But the wireless carriers are watching, too – obviously, AT&T and Verizon don’t want customers dodging fees with an inexpensive consumer device riding their wireless coat-tails.

Read the Complete Thread
BBF posts on January 21, 2010 04:23
Sprint used to offer a femtocell for $99 with a $5 a month fee (usually the $5 was waived if one complained.) I paid $50 for my refurb unit (direct from sprint) and was waived the $5 month fee. The only catch is that you use minutes from your cell phone plan while they use your broadband internet connection to make up for their cruddy wireless coverage in your residence.
They don't seem to be actively selling these femtocells anymore and they are only available through “retentions”.

Blame the spam filter for not allowing me to post a web address before my 5th post.
majorloser posts on January 20, 2010 14:49


I feel your pain.

And the funny thing is I just know you actually laid there in your rack and timed it.

damnngina15, post: 676699
The Magic Jack is a neat little device. I know a bunch of us over seas in Iraq and Afganistan use them on our laptops to stay in touch with our families back home. Add a bluetooth head set and they work like a champ, provided the internet is not too crowded as the speeds over here are no where near what they are in the states.

Ah, you mean it shouldn't take 18hrs to download a 22 minute TV show?


I feel your pain.
damnngina15 posts on January 20, 2010 14:08
The Magic Jack is a neat little device. I know a bunch of us over seas in Iraq and Afganistan use them on our laptops to stay in touch with our families back home. Add a bluetooth head set and they work like a champ, provided the internet is not too crowded as the speeds over here are no where near what they are in the states.
HDPCsound posts on January 20, 2010 11:17
Thats an interesting article Clint, in some countries people are experiencing problems with this gadget, cause telecommunication companies are blocking them. I hope this guys can find another way to use it without any issue.
Post Reply