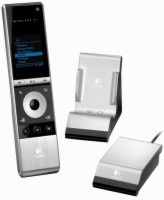 FREMONT, Calif. - Aug. 8, 2006 - Logitech today unveiled the Logitech® Wireless DJ™ Music System, which makes it easy for people to stream any digital music from their PC to any stereo system or powered multimedia speakers anywhere in their home and control it all from the palm of their hand.

The Wireless DJ Music System connects the PC to a home-entertainment center or speaker system using Logitech's Music Anywhere™ wireless technology. The system plays any PC audio format, including MP3, iTunes® (AAC), WMA, Internet radio, and podcasts. And the stylish, long-range Wireless DJ remote, with its display and scroll wheel, makes it easy to navigate an entire music collection from the couch, the dining-room table, the bedroom - anywhere.

"Today tens of millions of people are using their PC as a digital music hub to centralize their music collections and to discover new music" said Dale Pistilli, director of product marketing for Logitech's Media Control Group. "But most people don't have their PC connected to their home-entertainment system. The Wireless DJ Music System gives people full access to all of that great music anywhere in the home and the Wireless DJ remote puts control of that music in hand. It's a complete yet affordable solution that's easy to set up and doesn't require a complicated home network."

According to a recent worldwide survey by analyst firm Parks Associates, 40 percent of online households play music files on their PC and 33 percent listen to Internet radio streams. However, less than 10 percent of these people are playing this music through their stereo. The music remains stuck on the PC, away from the primary entertainment system or other rooms in the house. Existing solutions that bridge this divide are complex to set up, support only a limited number of music formats, or are priced out of reach for most consumers.

Logitech's Music Anywhere wireless technology combines plug-and-play simplicity with the clarity of digital audio, and works throughout the home, without requiring an existing wireless network. The transmitter plugs into a USB port on the PC and the Music Receiver/Dock is easily connected to a stereo system using standard RCA connectors, or to powered multimedia speakers using the 3.5 mm headphone jack output. Once the setup is complete, the Wireless DJ Music System sends music streams directly to the receiver, at a range of up to 50 meters (150 feet). The multi-room remote automatically connects to the PC and offers the same wireless range.

What makes the Wireless DJ Music System unique are the Wireless DJ remote and the sophisticated Logitech® StreamPoint™ software. The remote's blue backlighted liquid-crystal display (LCD) and mechanical scroll wheel make it easy to browse through an entire digital music collection, select a song, playlist or Internet radio station of choice, and see what's playing on the screen. The Wireless DJ remote also includes an active playlist feature, called the DJ List, which allows people to add songs or albums to the queue without stopping the music - people can pass the remote at a dinner party and everyone can be the DJ. Featuring a rechargeable lithium-ion battery, the remote is quickly recharged in the Music Receiver/Dock and offers up to one week of battery life under normal usage.

The Logitech StreamPoint™ software runs on the PC and aggregates audio files, playlists, and favorite Internet radio stations from iTunes, Windows Media® Player and Musicmatch® Jukebox, creating a unified music library that can be easily viewed and accessed by the Wireless DJ remote.

Pricing and Availability
The Logitech Wireless DJ Music System will be available in the U.S. and Europe in late September. Its suggested retail price in the U.S. is $249.99. Logitech also offers the Wireless Music System Add-On Receiver, for a suggested retail price of $79.99 (U.S.), which allows people to enjoy their PC music in additional rooms (up to a total of 4).